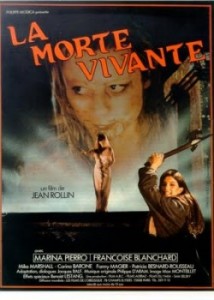 Jean Rollin was a legendary French filmmaker who released dozens of fantasy and horror films over a career spanning more than five decades. Many of his earlier films dealt with vampires, but 1982’s La Morte Vivante (The Living Dead Girl) features a different type of undead character in the form of Catherine Valmont, a deceased young woman brought back to life after a chemical spill in her tomb.

The Living Dead Girl’s opening scene establishes the film’s low production values. A couple of crypt robbers stumble around some underground tunnels until they find the coffins containing Catherine and her mother. An “earth tremor” knocks over a barrel containing chemicals stored nearby, causing Catherine to come back to life – violently. She claws out one guy’s eyeballs and tears out the other’s throat. The blood is bountiful even though the effects aren’t great, and clumsy editing further weakens the attack, but the graphic deaths and piercing screams still leave a lasting impression.

The film has quite a few other scenes that follow this gore-centered approach, including the intensely unsettling ending. Most of them come about because of Catherine’s childhood friend Helene, who at first doesn’t realize the undead state that Catherine is in. Once she does, though, she devotes herself entirely to sustaining Catherine’s need for human flesh. She begins to entrap victims for Catherine to murder and eat, but eventually Catherine realizes exactly what she is and tries to stop, willing to sacrifice herself if it means nobody else getting eaten. Helene is less than content with the plan and pushes Catherine to continue the carnage until she herself is murdered and eaten.
Catherine is played by the hauntingly beautiful Françoise Blanchard, able to be at once both terrifying and angelic. She has a virginal and doll-like appearance with her soft skin, long blonde hair, and continuous vacant stare, and this appearance clashes with the violence of her cannibalism – especially during the finale, in which she kills and eats Helene with an animalistic intensity. Marina Pierro, as Helene, is much less impressive and a fraction as riveting, her dull glances made even more lifeless through frequent close-ups.

Despite its short runtime, the film moves at a very slow pace. Rollin gives his shots consideration and creates compositions that are nice to look at, but he eschews any serious editing, letting his shots and scenes go on as long as they possibly can. We see characters enter and wait to watch them leave. The killing scenes are actually interspersed throughout a whole lot of melodrama, especially between Catherine and Helene, whose relationship seems to teeter between Sapphic and sisterly.

Between the occasionally poor acting and the consistently poor special effects, The Living Dead Girl can be a bit of a bore to watch, but there is something intriguing about watching Helene slowly become the true monster as Catherine grows more aware of her unnatural existence. It’s nice to look at, and the finale really is a triumph in effective horror filmmaking. It has plenty of flaws, but Jean Rollins was passionate about the films that he made. That passion shines through The Living Dead Girl and turns it into a B-level horror film worth watching.

Video: The BluRay transfer gives us a nice picture quality for this 1982 film. Even with its low budget, Rollin uses the 35mm celluloid to his advantage and creates nice composition and captures lots of bright red blood everywhere.

Sound: The mix is pretty imbalanced. Screams are turned up way too high and require a volume adjustment for every kill scene. Even dialogue between characters in the same scene is uneven. The American couple, whose scenes are already pointless and boring, suffer from this the most – Carina Barone’s lines come out like she’s talking loudly in an empty room while Mike Marshall’s utterances are barely audible.

Introduction from Jean Rollin (2 minutes): The aged filmmaker discusses how his first gore film was received in Europe, winning over the audience at its festival premiere. These statements are shot in grainy crimson footage, and Rollin’s heavily accented English is hard to follow. A mostly unnecessary extra.

Jean-Pierre Bouyxou on La Morte Vivante (7 minutes): French film critic Jean-Pierre Bouyxou, who was involved in the making of the film, sits on a couch and talks about his experience during the movie’s production. His speech includes some very tedious pauses whose omission would cut the interview’s runtime in half. His account is mildly interesting, and he ends the segment talking about Françoise Blanchard’s body and “shamelessness”.

The Living Dead Girl: The American Version (7 minutes): The Living Dead Girl was shot under unusual circumstances, with a French (Rollin’s) and American (Gregory Heller’s) version being shot concomitantly with the same cast and crew (only the director and the camera changed). Bouyxou gives what I imagine to be a pretty biased account of the animosity between Rollin and Heller. This footage comes from the same interview as the previous featurette’s, and Bouyxou’s speech is just as irritatingly stalled.

Music by Philippe D’ram (8 minutes): Composer Philippe D’ram talks about how he created the film’s score. D’ram’s knowledgeable about his craft and is able to convey the information easily, though he does get a little pedantic at some points. Lots of interesting stuff about the zither and the digital synthesizer he used, the DX7.

When I Was Seventeen: An Homage to Benoit Lestang (12 minutes): A featurette looking at make-up artist Benoit Lestang, who was hired by Rollin without any experience or credentials. Lestang talks about how little he knew and how awful he thought the final result was, basically apologizing for the film’s subpar effects. They were actually so bad to him that he spent the next four years in make-up school and emerged to find a newly-invigorated horror film industry in which to try out his new talents. Bouyxou pops up again to basically talk shit about Lestang and his effects, giving out plenty of backhanded compliments that seem even more out of place when you realize that Lestang died in 2008.

Jean Rollin at Fantasia (36 minutes): More than a half hour of footage of Jean Rollin at a 2007 convention. He presents one of his older films and then takes a Q&A session which offers a lot of valuable insight into his mind. He’s MUCH more articulate in his native French than he seemed speaking in broken English in the 2 minute introduction, and it’s nice to see him speaking for himself after so many featurettes discussing him second-hand. Rollin seems passionate and very aware of his status as a cult director. The best part is his response to someone asking him what he thought when audience members laughed at his films. He describes how that used to bother him, but with time, he came to accept and enjoy such a reaction because he realized it was appropriate. He’s a refreshingly honest filmmaker who seems to genuinely enjoy interacting with fans.

Excerpt of an interview with Jean Rollin by Joshua T. Gravel (3 minutes): A return to the Rollin of the introduction, in full grainy and broken English glory. He basically just describes a scene in the movie. Again, pretty pointless.

12-page booklet with an essay by Tim Lucas, editor of Video Watchdog: A really nice booklet lines the BluRay case, containing another written statement attesting to the genius of Jean Rollin.