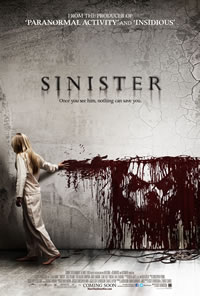 There’s plenty of horror, comedy, action, animation, drama and even another video game adaptation making something for everyone in this month. Let’s take a closer look.

Nine films will be opening on October 5, three of them are limited releases and one will have already been released On Demand. That’s a lot to sort through, but fortunately I’ve actually seen three of the nine already, which makes it a little easier.

First off is Butter, a political comedy that uses a butter carving contest in Iowa to parody the 2008 Election. I saw the film at the Toronto Film Festival last year and absolutely loved it. No stone is left unturned and it will certainly play better to those that kept a passing interest in the now-four-years-old election and won’t likely be enjoyed as much by those that didn’t, but I must say I had a great time with it. This one will be available On Demand on September 7, almost a month before it hits theaters.

Delving into the limited releases we first come to Lee Daniels’ The Paperboy starring Matthew McConaughey, Nicole Kidman, Zac Efron and David Oyelowo. I managed to catch the film at Cannes earlier this year (read my review here) and took some enjoyment out of the batshit crazy nature of it, but altogether it wasn’t a perfect film. Kidman’s character falls in love with a murderer (John Cusack) on death row and hires McConaughey to help get him out. Things happen.

Also getting a limited release is Andrea Arnold’s Wuthering Heights and the horror anthology V/H/S directed by a collective of horror helmers in Adam Wingard, Glenn McQuaid, Radio Silence, David Bruckner, Joe Swanberg and Ti West. From what I’ve gathered about both, neither seem to be my alley. Arnold’s adaptation of Bronte sounds very minimalist and esoteric and V/H/S takes the found footage genre and gives it a new spin as a group of criminals must sort through stacks of VHS tapes looking for what they’re after only to find the tapes they’re screening continue to get more horrifying in nature, one after the other.

One horror film I have heard good buzz about is Sinister from Scott Derrickson (The Exorcism of Emily Rose) which features Ethan Hawke as a true crime novelist who discovers a box of mysterious, disturbing home movies that plunge his family into a nightmarish experience of supernatural horror. Interestingly enough, the premise sounds slightly familiar to V/H/S, though, considering the directors involved, I expect Sinister will be slightly less depraved.

Tim Burton brings his own brand of horror to cinemas in October with Frankenweenie, a stop-motion animated feature based on his 1984 short film in which a young boy works away in his attic lab, attempting to bring his beloved dog Sparky back to life. Could be an animated contender but I can’t help but be wary as it feels like Burton has been repeating himself on what now seems like a long, downhill slide as of late.

On the comedy side the 5th offers a couple of additional options beyond Butter. I can’t tell what to make of Pitch Perfect, which looks like a feature version of “Glee” starring Anna Kendrick, Brittany Snow, Rebel Wilson, Christopher Mintz-Plasse and John Michael Higgins, but I can tell you I enjoyed The Oranges when I saw it last year in Toronto (read my review here).

The Oranges features an ensemble cast including Hugh Laurie, Catherine Keener, Leighton Meester, Adam Brody, Alia Shawkat, Allison Janney and Oliver Platt and is an infidelity comedy in which Laurie cheats on his wife (Keener) with the neighbor’s daughter (Meester). The cut I saw in Toronto has likely been edited a bit as it had only just been finished at that time with plenty of work still to be done, but hopefully director Julian Farino didn’t change too much because I loved what I saw.