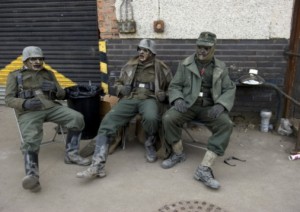 EVEN flesh-eating undead Nazis in rubber masks have a pecking order, as Jay Richardson found when he spent a day on the set of a Scottish zombie spectacular

Shooting a zombie blockbuster in Glasgow last summer, graciously posing for photographs with starstruck extras, Brad Pitt got a tiny taste of what it’s like to be me.

The excitement surrounding the Hollywood idol’s appearance in the forthcoming World War Z, which brought George Square to a standstill, was comparable to that accompanying my own performance, on an industrial estate on the north-east outskirts of the city just a few months earlier. As a zombie Nazi stormtrooper in Outpost II: Black Sun, I distinguished myself from my undead comrades with my inability to follow orders properly.

I’d very much enjoyed the original Outpost, a superior 2009 B-movie starring Thor’s Ray Stevenson, in which macho mercenaries were massacred by the Fourth Reich rising up in Eastern Europe. The film was shot for just £200,000 in Glasgow and Galloway by the production company Black Camel; when I learned they were making a sequel, I immediately set about enlisting as an extra.

Portraying an all-American hero is all very well if you’re Brad. But as a tall, blonde, blue-eyed Englishman of less chiselled cheekbones, cruel eyes and no acting ability to speak of, I’m your classic celluloid Nazi. Very much master race material returned to life by some horrible experiment. A grotesque rubber mask is probably over-egging the pudding.

I arrive at a business park in Stepps at 8am on a misty March day, towards the end of a five-week shoot for the film’s climax. A Nato platoon and the movie’s two leads, Richard Coyle (best known to me as Jeff in the sitcom Coupling) and Catherine Steadman (Will’s babysitter in The Inbetweeners) are about to descend into a Nazi bunker.

I meet Bill, armourer in charge of the guns and go a bit weak at the knees, anticipating the policeman who turns up, delighted to find that his beat today is standing about and watching explosions. Then I venture inside the warehouse to meet my contact, Katharine, who gives me a quick tour of the “ÜberOutpost”, a labyrinth of gloomy corridors culminating in a horrific operating room, with forlorn bodies hanging from chains and sinister rusting equipment. Turning a corner to be confronted by a giant Swastika proves genuinely disturbing.

A bell rings, there’s the crackle of sustained gunfire and a cry of pain. Birds outside scatter. An explosion and flash of light behind me. Territorial Army members pretending to be Nato forces rumble past. I contemplate a platter of croissants by the tea urns but figure I haven’t earned one yet.

I join a group of about 30 extras, chatting with a semi-pro filmmaker who’s just finished work on a Bollywood movie. It turns out that, like most in the room, he’ll be playing the corpse of an Eastern European villager. I’m singled out for SS duty though and dispatched to wardrobe. There’s an obvious hierarchy apparent, beginning with the two stars, followed by the loud, cocky actors playing Nato soldiers, finishing with the corpses, who, for the most part, are thrilled just to be meat puppets strewn around the set. As a Nazi zombie, I’m superior to them. But below any zombies with moveable face parts.

In wardrobe, I’m delighted to discover that Brad’s career is still aligning with mine, as our fatigues are cast-offs from his movie Inglorious Basterds, along with some genuine Second World War memorabilia supplied by a specialist stockist. The Nato costumes are recycled from Oscar-winner The Hurt Locker. I’m given a heavy overcoat, a cap I reckon will help me stand out amid all the helmets and a really good scuffing up. Rather controversially, at least among my fellow extras, poetic licence has been taken with our divisionally inaccurate SS accessories. Even undead Nazis care about appearances.

Next, I’m off to get my mask fitted, a moulded rubber skull that parks tightly over my neck snood, with a wonky mouth and one ear cut to accommodate my spectacles between scenes. For the eight hours I’m encased within, it’s an ongoing struggle to breathe. But I feel truly menacing, with an urge to turn up at a children’s party. When women on the crew ask me to pose for a photo with them, it’s a tremendous feeling. I wonder if Brad ever gets tired of it?

Because Gott im Himmel! I certainly need the distraction. Initially we’re told that we’ll be on set around 10am but I soon learn that the life of an extra is a lot of hanging around, killing time rather than Bosnian villagers. I chat with the rest of my platoon – Aaron, a taciturn member of the TA who needs to leave early for a doctor’s appointment; Martin, a former sound engineer who loves zombie flicks but hasn’t finished watching Outpost yet and doesn’t want it spoiled for him; Ben, a cheerful IT manager who happily reveals that he’s registered “four kills!” during shooting already and Alan, an aircraft mechanic who was in the original film and whose girlfriend is the on-set nurse. John, sadly, hasn’t turned up. £75 a day proved insufficient for him not to desert.

Weird as it is getting to know complete strangers with your heads encased in rubber, as you smoke, text, discuss the Nazi matron’s suspenders or wander round the warehouse, with screams echoing from within, it’s weirder still peeling off the mask for lunch and seeing each other for the first time, recognising one another from your panda black eye makeup. It just helps to confirm that you’re not a fascist monster.

I speak with some of the other extras, one of whom, William, has driven overnight from Wales for the privilege of being a corpse. PJ, Paul and Jonathan are veteran crowd-fillers who met on Garrow’s Law. PJ has been an extra for two decades and reckons “it’s something different, you could be digging up the street. Compared to what it was years ago, people take it a lot more seriously now. You grin and bear the cold and the rain because it gives you a story on Friday night.” Paul agrees, saying that “in my experience you’re mostly treated well” and it’s “every extra’s dream to be in a zombie movie once”. After his appearance in a sex documentary, they gently rib Jonathan who points out that Ricky Gervais and Stephen Merchant’s Extras “was very true to life”.

Eventually, around 5pm, and after Aaron has left for the doctor, all surviving Nazi zombies without movable jaws are summoned to the foreboding operating room and made to swill fake blood around our gums for sadistic dribbling. Asked by the assistant director if I’ve any injuries or conditions that might prevent me picking up a couple of grinning teenage extras and hurling them onto a crash mat, I lie about my bad back and perform two of the most awkward firemen’s lifts ever committed to the cutting room floor, skidding in fake blood and throwing a girl down much too heavily. Ben meanwhile, performs exactly the same task with nonchalant ease.

Pleased to have secured perhaps two seconds of screen time, I prepare to head home, tar black gunk still clogging my nostrils. But not before Richard Coyle enjoys a long, hard laugh at my glasses, hanging lopsidedly off my slashed ear. And William, the teenager who travelled all the way from Wales, asks me to pose for a photo.