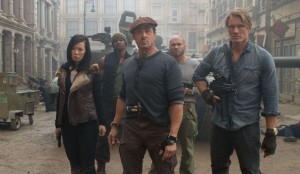 Guns, fights, blood, death – all displayed in the way that Hollywood cinema delivered mega tonnes of back in the day. I didn’t have to think. Enter Sly Stallone, Bruce Willis and Arnold Schwarzenegger.

They join an array of other action legends in what appears to recycle their decades-old blockbusters. Recycling is good I say. Crack wry one-liners and bloody shootouts included. And it continues with old-school action and explosions.

Director Simon West starts it off with a bang through Nepal into Albania and on to Bulgaria.

The plot is thin as Jean-Claude Van Damme struggles with his villain role and the theft of a monster load of plutonium. Enter Chuck Norris, another plastic surgery disaster and quite the hand with a machine gun. Bang bang. Plenty of splatter in this one.

Stallone gets the joke and basks in his serious one liners. He wrote the script. There are plenty of jokes, many based on some very familiar lines from the golden days.

The Expendables 2 is heaps of fun and really dumb.