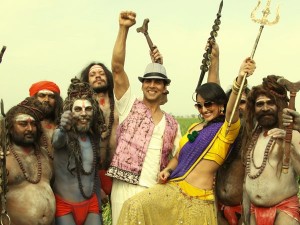 It’s not every day that a sci-fi aficionado gets to site the example of Plan 9 From Outerspace. It’s that “blue moon” moment (which serendipitously falls tonight) when you get to hark back to the genius of Ed Wood Jr. FYI, Ed Wood made some of Hollywood’s silliest but cult sci-fi films back when theatres were monochrome and alien suits weren’t rendered in HD but made out of ABS plastic. Well, Shirish Kunder’s Joker is every bit as silly and fun as a cult B-grade feature. B-grade doesn’t mean bad. B-grade simply means it’s so preposterous it’s funny.

The film obviously mimics previous alien flicks like ET, Koi… Mil Gaya, heck it even parodies Hindi classics like Lagaan and Swades. To watch a genuine slapstick satire of both Indian and Hollywood movies, in India is a rare sight. Joker pokes fun at all those over-the-top plotlines we’ve come to accept and hold in high regard. And then, like a Scary Movie, it throws it all out into the open and you can’t help but laugh. So Akshay Kumar is a qualified US scientist working on a machine that promises to communicate with extra terrestrials. His machine doesn’t deliver on time and his employers lose faith in their judgement. To add to this burden Akshay has to deal with the news of his ailing father. A quick dash to India snowballs into Akshay’s new quest. He decides to put his village, aptly titled ‘Paglapur’ (a town of idiots) on the popularity map. He puts two and two together and makes a fake crop circle. The ever-hungry-for-an-exclusive-bite Indian media laps up the situation and puts Paglapur on the airwaves.

So you have Paglapur populated by a dozen OB vans, a giant wheel fair, NASA scientists and Indian and foreign armies all amused by a bunch of villagers dressed in alien suits made out of fruits and vegetables. Did we mention the army tanks are made out of rubber? Well that’s the best thing about Joker. The film and all its props are like a summer camp project and yet, when all of that juvenile production comes together, the sum of its parts entertains you.

This happens mainly because Joker is a well written film. Like the Indian cricket team this film is so strong on paper that its genuine talent shines through its lacklustre and downright shoddy execution. The apex of which is the film’s dialogue. You have Asrani, stuck in time loop and pointing fingers at Boeings and calling them Hitler’s bombers. He likes to translate Hindi to English and vice versa as he exclaims random rubbish like “Aasteen ka saanp! Hope three snake!” If that’s not enough, Shreyas Talpade mouthing gibberish is bound to tickle your slapstick senses. Also, Vindoo Dara Singh for some ambiguous reason is dressed in a Roman Toga throughout. And there’s an Englishman called Lord Faukland and he has a Punjabi accent. The film even manages to convince you about its title. The analogy of a Joker in a pack of cards is a fine touch as well.

Watching Joker is like being doped out of your skull. Once you let go of the initial inhibition and let its intoxication take effect, the film leaves you in splits. Sure you might say this is Akshay Kumar’s and Sonakshi Sinha’s film. But it’s not. It’s a film driven by its well rounded script and peppered with decent performances. Heck it even accidentally manages to ridicule the corruption of our country’s socio-political scenario.

This isn’t a movie you recommend in film schools. This is a parody you watch to test your sense of humour. It’s a nice mix of Hollywood humour and Bollywood charm. A fine combination of cotton dhotis and the tilt of that Fedora hat.