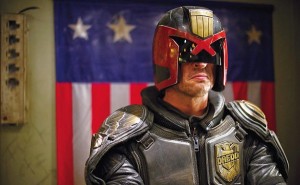 Film festivals and comic book movies typically don’t mix. Movies based on popular paneled heroes generally get their start at conventions or through marketing departments. Yet, thanks to TIFF’s Midnight Madness program a certain gruff helmet sporting antihero from the long running British comic book series 2000 A.D. is getting the red carpet film festival treatment. That’s right Judge Dredd has returned to the big screen in the hopes of erasing all the painful memories of Sylvester Stallone and Rob Schneider ruining the image of the darkly satirical and viciously violent character with one of the worst examples of overblown 90s blockbuster tripe. Finally put into the hands of filmmakers who are fans of the blood-soaked pulpy roots, Dredd 3D manages to get the tone and style of John Wagner’s uniquely twisted world right. It’s not perfect, but it is an appropriately nasty blast of B-movie thrills that effectively reintroduces Judge Dredd on the big screen and would be a welcome starting point for a franchise. Hit the jump to find out why.

For those who have missed out on Judge Dredd’s 35-year run in comics, here are the basics. The film is set in a dystopian future defined by several Mega Cities, sprawling metropolises overpopulated by millions and overrun with crime. With the police force only able to handle roughly 6 percent of the reported crimes in a given day, the rules of law have changed slightly. There are no police, there are only patrolling Street Judges who have the power to be police, judge, jury, and executioner all in one. Judge Dredd is the gruff, almost fascist poster boy for the force. He’s a man all to happy to dole out justice in a hail of bullets. The film sees Karl Urban’s deadpan growling take on the character partnered up with Olivia Thirby’s rookie Judge Anderson (a psychic, much like the comics), supervising and evaluating her first day on the job. Dredd lets Anderson pick their first crime and she chooses a disgusting triple homicide at one of the massive high-rises/contained ghettos in Mega-City.

Three bodies were skinned and tossed from the top floor of the mile-high building. They were killed for crossing the building’s resident crimelord/drug manufacturer Ma-Ma (Lena Headey), a former prostitute-turned sadistic killer. They arrive at the building and at this point the movie unfortunately turns into an unplanned remake of The Raid. Ma-Ma locks down the building and pits her entire army against the two judges, who are forced to kill their way to the top floor. Now, it’s worth noting that Judge Dredd superfan screenwriter Alex Garland (28 Days L,ater) has been nursing along this pet project for years. The film went into production simultaneously with The Raid and in no way planned on ripping off that delightfully batshit insane instant action classic. Sadly, when you arrive in second place on a concept like this, there’s no way to make excuses to viewers. You can’t help but compare Dredd 3D to The Raid and much like every other contemporary action movie, it just can’t live up to Gareth Evans’ incredible (and incredibly bloody) accomplishment.

Thankfully the film does at least succeed on it’s own terms and The Raid formula is about as efficient as action machines get. Writer/producer Garland’s love for the Judge Dredd world is palpable. Even though he didn’t directly adapt any of the legion of stories in the 2000 A.D. back catalogue, he creates something that feels like it belongs in the cannon. His Dredd is militant force of violent justice and Karl Urban (who luckily resists the temptation to ever remove his iconic helmet) delivers his lines in a Clint Eastwood style growl with a dark sense of humor that nails the character as intended. When he announces “I am the law,” it’s an audience-rousing moment of bad-assitude, rather than the youtube clip ready campy embarrassment of Sylvester Stallone’s misguided rendition. The future world in the 2000 AD house style (which heavily influenced Ridley Scott when he was reinventing the Hollywood sci-fi aesthetic at the start of his career) is recreated well and the action is just as dirty and bloody as longtime fans crave. This is a hard-R action movie that splashes blood and explodes heads like the genre used to. It’s nice to see some studio support for that sadly abandoned form of sleazy B-movie thrills.

The movie isn’t all perfect of course. The dark satire that often defines the comics is sadly absent. Anderson’s psychic powers are awkwardly used only when script advancement needs to be sped up and they seem non-existent when that enhances the drama. Some of the performances are a little cardboard and while director Pete Travis frames some gorgeous 3D imagery, his car-commercial aesthetic is determined more by a barrage of beauty shots than the carefully constructed action rhythms this type of flick demands. The movie is certainly flawed, but at least it finally presents Judge Dredd as the creators intended. Dredd 3D is a strong introduction to the iconic character for unfamiliar audiences and effectively brings the tone of hard boiled violent adult comic books to the big screen. Hopefully it will be successful enough to launch a few sequels that will allow Garland to further explore this world and maybe even adapt one of the classic Judge Dredd storylines (The Apocalypse Wars in particular could be one hell of a movie if Lionsgate had a few hundred million dollars to spare on the project). But even if that doesn’t happen, chances are Dredd 3D will at least become a guilty pleasure favorite for fans of the original comics and bloody action movies unafraid to dive into the realm of delightful bad taste.