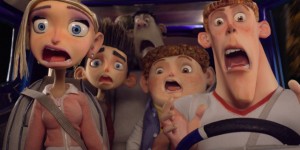 Opening in 4:3 with scratchy studio logos and a “Feature Presentation” snippet, with dirt, grain and sound-jerking like a messed-up print of a well-worn B movie, ParaNorman opens in a manner that cements itself early in the nerdiness of an ’80s movie fanatic; those that remember sitting close to a small telly, watching films they shouldn’t in a darkened room as their parents do odd jobs around the house, not caring what their child watches. And Norman, played brilliantly by Kodi Smit-McPhee, is watching a poorly made zombie horror, complete with chomped brains, booms in shot, continuity errors and shuffling, not running, zombies.

In the opening segment, we learn about Norman’s ability to talk to those now deceased, and how his father – loudly played by Jeff Garlin – is upset that he’s not doing normal kid things instead of claiming he sees Grandma on the sofa. After this, we discover the living, breathing town based entirely on the witch trials of centuries past, and how important they are to the history and culture of the townsfolk; all of them original, and interesting, and Norman more so than any of them with his special ability. Naturally, someone who claims he can speak to those now passed hasn’t got much of an active social life, and spends time in school being bullied by bulky Alvin (a whiney but well handled Christopher Mintz-Plasse). However, when his uncle (John Goodman) harrases Norman about his destiny, about reading a book to the soul of a witch to stop the end of the world, the film takes on a lighter tone, and an adventure begins.

With friend Neil (Tucker Albrizzi perfectly playing a goofy role) in tow, and their older siblings (Anna Kendrick and Casey Affleck) the film kicks off with a rocketing pace, matching action beats with sight gags, honest characterisation and splendid animation. A mix of zombie thriller, paranormal horror and kids adventure, ParaNorman nails the feel of the great family films of the ’80s and ’90s – ones that weren’t afraid to hit darker notes, be a bit more grotesque and put a child in jeopardy. And best of all, had lots of great jokes for adults, such as an Exorcist ringtone playing at the most inopportune moment, or the beat between Norman and his uncle: “You must swear to me.” “You mean, life, the F-word?”

The animation is absolutely breathtaking; the 3D works a treat, giving a real sense of depth and life to every shot and lots of eye-popping moments to boot, but the beauty comes from the animation itself. With every character doing something, albeit small, in every frame – the film feels alive, and it’s unbelievably crisp. Norman’s fingers twitch as he shuffles close to the door of a scary, empty, dark house. His sister’s hair flies about as they are stuck in a high-speeding van, being chased by slow-crawling zombies. Norman’s pupils bulge slightly when he sets his eyes on the book he’s hunting for. Small details that make the film exceptional, and demand more than one viewing to even take time to focus on.

On top of all that, Jon Brion’s ’80s synth-meets-orchestral score is great; harkening back to John Carpenter without breaking the fourth wall, it has a retro feel to it, but one that also feels original and entirely new. In short, ParaNorman, though not for the younger kids, is a beautiful and frequently furiously funny film that has a wonderful message presented with much subtlety, and hidden between a lot more non-PC moments. A gem of a film – it seems we’re looking at this year’s Best Animation Oscar winner.