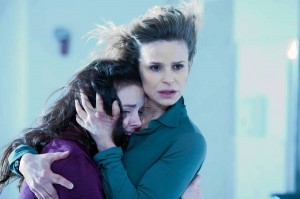 Two new films tanked at the box office this weekend, resulting in the lowest ticket sales in more than a decade.

The weekend’s winner was a holdover: “The Possession,” the horror flick that topped the box office over the Labor Day holiday. The film collected an additional $9.5 million, according to an estimate from distributor Lionsgate, raising its overall total to a solid $33.3 million.

But “The Words,” a romance thriller starring Bradley Cooper, trailed behind — opening on the low end of Hollywood projections with $5 million. The movie at least performed better than the debut of “The Cold Light of Day,” an action film starring upcoming “Man of Steel” Henry Cavill that bombed with a dismal $1.8 million.

Overall, North American ticket sales amounted to only $67 million — the lowest sum since the second weekend after the Sept. 11 terrorist attacks, when the take was just $59.4 million. Receipts were down 18% from the same weekend last year, when at least one film was able to crack the $10-million mark.

“Nobody picks the first weekend of September because they think it’s going to be a huge gross,” acknowledged Steven Friedlander, executive vice president of theatrical distribution for CBS Films, which is releasing “The Words.” “You open films that you want to sit there and find an audience. Historically, it’s a weekend where people are getting their life back into order after the summer, and movies aren’t part of it. You’re doing back-to-school shopping, getting the kids into the dorms, and soccer moms are back on the road.”

The few who did turn up to see “The Words” this weekend were mostly older women, as 58% of the audience was female and 78% was over age 25.

In the film, Cooper plays a down-on-his-luck aspiring novelist who encounters an ethical dilemma when he comes across an unpublished manuscript from the 1940s.

The $6-million production, acquired by CBS Films for $2 million at the Sundance Film Festival in January, has received mostly terrible reviews. However, crowds this weekend were kinder than critics, assigning it an average grade of B, according to market research firm CinemaScore.

Cooper, who rose to fame after the success of the raunchy ensemble comedy “The Hangover” in 2009, had better success as a leading man with last year’s hit “Limitless.” The 37-year-old actor currently has two films at the Toronto International Film Festival: “The Place Beyond the Pines” and “Silver Linings Playbook,” each earning him strong reviews.

“I don’t think the performance of ‘The Words’ is an indictment of Bradley Cooper,” Friedlander said. “I think he does have the potential to be a strong leading man. The bad reviews were really about the movie — they weren’t about his performance.”

Similarly, “The Cold Light of Day” star Cavill will hope to attract more positive attention when he debuts as Warner Bros.’ new Superman next summer. The British actor, best known for his role in 2011’s sword-and-sandals epic “Immortals,” is still a newcomer to U.S. audiences.

His latest film barely got any promotion from Lionsgate’s Summit Entertainment after a poor international run prior to the film’s North American debut indicated it probably wouldn’t fare well domestically. Indeed, audiences hated it, giving it an average D+ grade.

The studio co-financed the movie, about a man whose family is kidnapped during a family holiday in Spain, for about $20 million with Intrepid Pictures.

One bright spot this weekend was an Imax re-release of 1981’s “Indiana Jones and the Raiders of the Lost Ark,” which collected a surprisingly strong $1.7 million. The Steven Spielberg-directed movie starring Harrison Ford is currently in 267 theaters for a one-week engagement.

Meanwhile, the crude wedding comedy “Bachelorette” did so-so business in theaters after premiering on video-on-demand Aug. 10. The film, starring Kirsten Dunst, Isla Fisher and Lizzy Caplan, opened in 47 theaters this weekend and grossed $191,033 for a soft per-location average of $4,046.