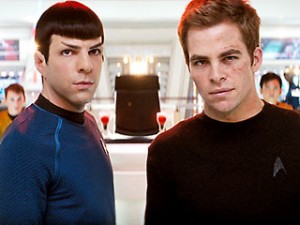 EW has confirmed that the official title for director J.J. Abrams’ sequel to his 2009 film Star Trek will be Star Trek Into Darkness. (TrekMovie.com first reported the news.)
The moniker further differentiates Abrams’ reboot of the venerable sci-fi franchise from the earlier Trek movies, which either went the roman-numeral-and-subtitle route (i.e. Star Trek II: The Wrath of Khan) or eschewed the number for just a colon-ized subtitle (i.e. Star Trek: First Contact). But it also presents an unusual mental picture — are the stars trekking into some unknown darkness? — that only raises more questions about the film’s tightly guarded plot. For me, the title evokes the black holes and singularities that drove so much of the story in Abrams’ first Trek film, from the time traveling to the destruction of Vulcan. It also suggests that things won’t be quite as plucky and optimistic as they were in the earlier film.
We do know one thing for certain: Star Trek Into Darkness is nowhere near the first movie sequel title to avoid numbers and colons. Earlier this year, there was, of course, The Dark Knight Rises. There’s also Die Hard with a Vengeance, Live Free or Die Hard, and next year’s A Good Day to Die Hard. The Harry Potter films avoided colons until the final two sullied things with em dashes and numbers. And before George Lucas re-wrote history in an orgy of roman numerals, colons, and em dashes, Star Wars was followed simply by The Empire Strikes Back and Return of the Jedi.
EW DAILY POLL: ‘The Voice’ premiere: Biggest star? — Vote now!
This fancy nomenclature is not restricted to budget-busting summer blockbusters, either. Analyze This‘s sequel was Analyze That. Before Sunrise was followed by Before Sunset (and, next year, Before Midnight). And who can forget Bill and Ted’s Bogus Journey?