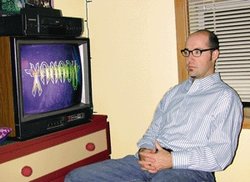 “I hate to admit it, but I just don’t get off on movies like Can’t Stop The Music or Krull or The Bee Gees’ Sgt. Pepper’s Lonely Hearts Club Band like I used to,’ Erdman told longtime friend Patrick Faulk, 33, over drinks at Melvin’s, a non-retro, non-hipster, family-style restaurant. “Even that one where Gary Coleman is living in the bus-station locker and picks winning horses doesn’t do it for me anymore. The sad fact is, I can’t get excited by anything unless I actually, without irony, enjoy it. How lame is that?”

Citing such factors as work-related stress, mortgage worries, and the ever-growing duties of parenthood and marriage, Erdman said he has finally accepted the reality that embarrassingly bad films, TV shows, and consumer products are no longer a viable source of amusement for him.

“I turn on the TV these days, and if I see something that’s unbelievably stupid and insulting to my intelligence, all I want to do is turn it off,” said Erdman, pausing to sip from a Tom Collins, a drink he began ordering in 1989 to be amusing but now orders without irony on the rare occasion when he still drinks. “What’s happened to me?”

A UNIX system administrator for Arthur Andersen with a wife and 4-year-old daughter, Erdman explained that his busy schedule forces him to spend what little leisure time he has pursuing that which is of sincere interest only.

“As far as TV goes, I enjoy NewsHour With Jim Lehrer, and I’ll watch nature shows. As long it’s something of genuine interest to me, with actual educational value,” Erdman said. “I can’t believe this is me talking, but when I do find myself with some free time, I don’t want to spend it on some crap I don’t actually like.”

Suffering from kitsch fatigue, Erdman recently did a thorough sweep of his house, throwing out dozens of items he once found hilarious. Among the discarded articles: a Buckner & Garcia Pac-Man Fever LP, which he was delighted to find in a used-record store seven years ago but now just finds stupid; a 1970s promotional T-shirt reading “Dare To Get Bare With Nair!” which he is now too embarrassed to wear; and a stack of What’s Happening?-themed school supplies.

Wildly Popular ‘Iron Man’ Trailer To Be Adapted Into Full-Length Film
Those close to Erdman say they have noticed the change, as well.

“I got this cool tape off eBay containing four episodes of the TV show The New Scooby-Doo Movies–not the original CBS Scooby-Doo, Where Are You! show, but the even worse one that came out a few years later, the one with Scooby-Dum and Scooby-Dear, and all these really lame minor-celebrity guest stars like Tim Conway and Jerry Reed,” said Erdman’s brother Kevin , 26. “Dave was supposed to come over and watch it with me, but he canceled. I later found out it was because he and his wife went to see some Arthur Miller play. How dork-ass is that?”

Said Greg Talley, 33, a former college roommate of Erdman’s: “When me and Dave lived in Alaska for a summer, just after graduating, there was this unbelievably terrible ’80s movie we saw one night at like three in the morning. It was called BMX Bandits, and it starred this guy named Angelo D’Angelo. Can you believe that? It was so friggin’ funny. We laughed about it all summer long.”

Talley added that, though neither he nor Erdman knew who she was at the time, BMX Bandits also featured a teenage Nicole Kidman, whose current star status led to the film’s recent re-release on video. Upon discovering this, Talley immediately purchased a copy of the film to send to his old friend.

“I thought for sure Dave would flip out when he opened the package and saw the video box,” Talley said. “But when I called him, he didn’t even remember what it was. When he did finally get around to watching it, all he said was, ‘I wouldn’t exactly call that a great film.’ Huh? It’s like, no duh… That’s the point! I mean, what the hell?”

“David is a grown man now, and he’s got a lot more important things to do than obsess over some movie where John Travolta has to live in a bubble because of a rare disease,” Allison said. “And William Shatner’s lead performance in 1977’s colossally bad Kingdom Of the Spiders isn’t going to pay the bills or register Caitlin for immunization shots, is it?”

Erdman, however, is not so certain about his changing sensibilities.

“I used to be able to take great pleasure in not enjoying things,” Erdman said. “But these days, the only things I like are things I like. Christ, I feel so old.”