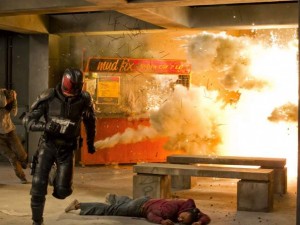 In an age where every other action film references Sept. 11 or the Occupy movement, “Dredd 3D” is centered squarely in the fears of 1983.

An irradiated wasteland. Overpopulation. Society under martial law, where police act as judge, jury and executioner. Rush lyricist Neil Peart warned us this might happen …

Don’t think about it too much — screenwriter Alex Garland certainly didn’t. Instead he focuses on the bleak tone, simplicity of character and cathartic violence of the comic strip source material. The result is a B-movie success — and the rare superhero film that revels in its carnage instead of stifling it for a PG-13 rating.

“Judge Dredd” has been a popular British crime-fighter since 1977, long before the 1993 “Judge Dredd” movie, whose atrocities include a gratuitous love interest, the removal of Dredd’s helmet and Rob Schneider in comic relief.

This “Dredd” features Karl Urban, and credit the guy for not having a runaway ego. He talks like an animatronic version of Clint Eastwood and reveals only the bottom third of his face throughout the film. I’m guessing 60 percent of the audience will leave the theater thinking he’s Thomas Jane.

As dystopian futures go, the one in “Dredd” is pretty bleak. People live in “Mega-Cities,” where crime is rampant and due process is optional. Judge Dredd and his psychic partner Anderson (Olivia Thirlby) respond to a crime in the low-income tower Peach Trees. Gang leader Ma-Ma (Lena Headey) decides to pin the judges in and execute them. The rest of the movie resembles a claustrophobic “Assault on Precinct 13.”

From the start, “Dredd” does several things right.

The back story takes about 12 seconds. We know nothing about how Dredd became Dredd, or even his simplest motivations. Here’s your method acting cue, Karl: This character likes to blow stuff up.