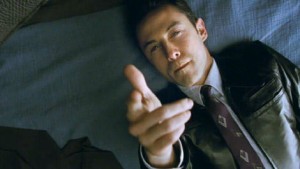 There are two reasons I didn’t like “Looper” very much. The first is how the cast talked about the film.

“This is the best acting I have done,” Joseph Gordon Levitt said in an interview at this past summer’s Comic Con.

Emily Blunt, in the same interview, said “I think it is probably one of the best movies I have been lucky enough to be in.”

I disagree with both actors; Blunt’s best work is “The Devil Wears Prada” or “The Young Victoria,” while Levitt’s best performance still is “500 Days of Summer,” but clearly he has been in far more impressive films like “Inception and “The Dark Knight Rises.”

If all that wasn’t enough overselling, Bruce Willis himself said to Esquire magazine, “It’s better than anything I’ve ever done.”

C’mon guys, either they saw something completely different or they are being paid to hype this thing because, while it is very interesting and above average, it is not one of those films that blows you away.

Kansas 2044, time travel has not been invented yet, but that will happen 30 years in the future and be illegal. However, certain criminal circles are using the time travel technology to send people from the future to the present so hired men called loopers can kill them when they show up.

Joe (Levitt) is one of those people. He waits for a specific time in a cane field in Kansas, and when the person appears, head covered, tied up, with payment strapped to his back, he kills him without blinking. These same people he is working for like to close all the gaps, so eventually the looper’s future self is one of the intended targets.

Joe fails to kill his older self (Willis) and instead gets more information on his own future and what darkness waits 30 years ahead.

Oscar pundit and film critic Jeffery Welles complained that “Looper” didn’t explore the conversation he would have expected “present Joe” and “future Joe” to have when they met.

Writer and director Rain Wilson (who also directed Levitt in “Brick” and “The Brothers Bloom”) avoids the type of conversation piece Welles expected by having Willis’s character say he doesn’t want to talk about any of “that stuff,” saying how they will just spend hours discussing things that won’t matter.

The other reason I had a major problem with this film, without spoiling anything, is how much one of the characters in “Looper” is copied from “X-Men: The Last Stand.”

There were even moments of the film where I felt the focus should be changed from one character to another and from one plot to another. I found the pace sluggish until Blunt’s character comes on the scene. Her character gives the film a boost right when it needs it.

“Looper” just isn’t ground breaking and I wasn’t as impressed with the amount of science fiction cinematics this film pulled off with a small budget as much as I was with “Chronicle.”