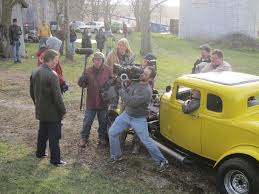 Bill Dever knows precisely why hundreds of people flock to his B Movie Celebrations featuring monsters as oversized as the flicks’ campy fun.

“There are a lot of maladjusted people out there,” Dever said with a laugh.

Consider the Franklin resident proudly among them. Dever will host the sixth annual B Movie Celebration this weekend at Columbus’ YES Cinema. In past years, the fest’s lighthearted focus entertained up to 2,000 fans, including some from all over the globe, at Franklin’s Artcraft Theatre and two other Johnson County venues.

Fangoria.com, a leading horror and monster movie website, last year called Dever’s gatherings “one of the most unique film festival/convention hybrids in the United States.”

With film titles this year such as, “Zombies From Outer Space,” “Virgin Beach Creature,” and “Two-Headed Shark Attack,” how can he go wrong?

“A lot of these films’ popularity is linked to escapism,” he said.

Dever said he’s grateful for the support of his efforts promoting films mostly about creatures from brain-suckers to blobs. Attendance is important, but the screenwriter is focused elsewhere.

“I’d be happy even with small numbers,” Dever said. “What I really want is to see people excited about these films.”

This includes “Gila,” which he produced and helped write, about a lizard-like creature terrorizing Franklin’s unsuspecting citizens. It is a remake of the 1959 sci-fi classic, “Giant Gila Monster.”

Columbus’ Robert Hay-Smith, known here for his jazz music, theatrical performances and stage direction roles, traded in his smarts to play a clueless truck driver steering into the path of the Big Green Guy looking for lunch.

He laughed when asked if he and a passenger “go down easily,” so to speak, in their big scene. Though no cast members have seen the finished product, Hay-Smith can guess.

“I think that we do (get eaten),” he said, but not before downing a bottle of tea made to look like whiskey.

Columbus’ Jeff Bodart can relate to such fun. He played Larry the ambulance driver, who tries to stay beyond the reach of danger.

“I don’t think I actually go face to face with the monster,” Bodart said. “But it was fun.”

Dever hopes viewers here see the value of the festival in an age when Hollywood presents its own take on the genre. Though the budgets in Tinsel Town are larger, Dever said that many blockbuster hits, such as “Transformers,” embody the same campy fun as B movies, and that he believes that the roots of “the grand American cinematic tradition” lie in these older films.

Consequently, Dever mentioned that he and his brethren deserve a little more respect from the bigger boys and girls on the filmmaking block.

“Low-budget B is considered to be second class or in some way inferior to Hollywood’s slick corporate product,” he said. “We at the B Movie Celebration know otherwise.”