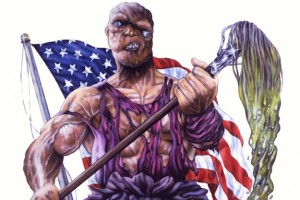 While most major studios are wading very slowly into the world of online streaming, iconoclastic/disgusting independent studio Troma has dove in head first: they’ve uploaded 150 movies to their YouTube channel, which you can watch for free right now. Is this a sign of things to come?

Although most famous for producing ‘The Toxic Avenger’ in 1984, Troma owns the distribution rights to countless infamous and undiscovered B-movies. Those unfamiliar with the company only have to look at the titles of the available-to-stream films to know what we’re dealing with here: ‘Bigfoot.’ ‘Pot Zombies.’ ‘I Was a Teenage TV Terrorist.’ ‘Slaughter Party.’ ‘Psycho Sleepover.’ ‘Killer Condom.’ ‘Flesh Eaters From Outer Space.’ You get the point (although there are a handful of bonafide good movies scattered in there, like Bela Lugosi’s ‘White Zombie’). Before you click that link above, know that virtually their entire output is NSFW.

Love ‘em or hate ‘em (you’ll rarely find a hardcore movie fan indifferent to them), Troma and its founder Lloyd Kaufman have always been ahead of the curve when it comes to unique distribution and indie (cheap) filmmaking. Heck, director James Gunn got his start with them and he’s the current frontrunner for Marvel’s ‘Guardians of the Galaxy‘! While the big boys stumble forward, this comes across as a statement: Troma has tons of movies and they’re going to let you watch them for free on your computer. On YouTube, no less.

Between this and Hammer Films making a handful of films available for free on their YouTube channel, are we seeing a new step forward for smaller distributors? While Warner Bros. and Paramount work out complicated deals to put their films on Amazon and Netflix, the little guys are cutting to the chase and jumping to YouTube. Is this the wave of the future, particularly for older films? What do you think?