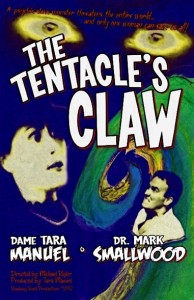 Filmmaker Michael Rigler said after the B Movie Celebration premiere of ‘The Tentacles Claw’ that “you film what you can”. Simple, but with a 1200 Canadian dollar budget you better follow that rule or the film may not come out the way you want.

Michael along with his wife Tara Manuel used their limited resources to their advantage and made a film that you can watch multiple times and catch things you missed.  Mostly intentional quirky things, but some may not be intentional like a swarm of bugs or trying to avoid the taunting children from a distance.  Tara and Mark Smallwood’s over the top 50’s dramatic acting is very entertaining and comical.

The cast had full time jobs other than acting, how did that affect your filming?

MICHAEL: Shooting around the work schedules of our cast and crew meant a lot more planning had to go into each days shooting. We built each day’s shooting schedule around people’s work commitments. We had some days where everyone involved was on hand all day. However, most days involved combinations of cast and crew arriving and leaving at different points in the shooting day. We had to coordinate our shot list to work within those time constraints. As far as we know, we managed to get each of our shooting days completed without making anyone late for work. As producer and director, we booked our vacations around our shooting schedule and only had a few evenings where we met up after work to shoot a half-day. It took some skillful coordination and the unglamorous, but essential skill of time management to pull it off.

Who created the “monster” and can you describe it’s physical characteristics?

MICHAEL: The creature was an eight-inch tall sculpture I made and shot on a green screen. The “lovey” face, was made separately and composited onto the “angry” creature. He was made out of Sculpey over a wire armature. Sadly, our terrifying beast was broken during post-production. The tentacle you see in the film is a nine-foot long, wireframe structure, wrapped in painted fabric and stuffed with bubble wrap (to keep it light enough to float into the frames).

Original puppet shows are part of our stock-in-trade at Shadowy Souls Inc. and we treated the solitary tentacle as another one of our puppet performers. Part of the original gag was that we could only afford one monstrous limb, and the victims would have to engage our puppet appendage and in some cases, strangle themselves with it. We fondly dubbed the interplay between puppeteer and actor “tentacle wrangling”. 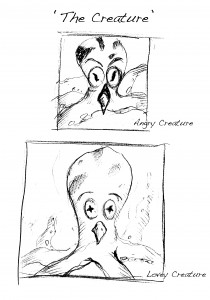 You have several more scripts in development.  Has ‘The Tentacles Claw’ given you any leverage to getting your other scripts filmed?

TARA: It certainly has. We’re actually not finished with The Tentacle’s Claw yet. We’ve been encouraged by a Montreal distributor to add 10 minutes to the length, to bring us up to the minimum length requirement for feature films in Canada, 80 minutes. She believes the work is strong enough for a limited theatrical release in Canada. So we’ve teamed up with an entertainment company and are awaiting word from one of our funding agencies regarding investment to finish the film properly. This is very exciting!

Filming can be very stressful, but it appears otherwise with your film.  How much fun did you have making this film?

TARA: We had a blast filming it. It was work, but fun work. The real work came after the footage was shot and Michael had to edit, create effects, compose music, and we started marketing. Michael worked through the night over a period of 20 months on top of his full time day job as a director/technical producer for Rogers T.V. in Corner Brook, Newfoundland.

Tara you also perform Cabaret, are an author, perform shadow puppet shows, and do readings.  Can you tell us a little about each one of those?

TARA: The debut show of our production company, Shadowy Souls, is an original shadow puppetry version of “St. George and the Dragon”, which combines Turkish inspired shadow puppets with digital projection and animation. We designed this show to go on the road, all the elements break down to fit into and on top of my car. I have toured this show solo to nearly 40 schools on the coast of labrador, and in northern, western, and southern Newfoundland. I build, tech, perform the show, and teach workshops at each school. Here’s a short clip: http://www.youtube.com/watch?v=zg99Yv_bav8

I’m also a singer, and the author of three books. (Walking Through Shadows- Thistledown Press 2011, and Filling The Belly 2003) I’ve recently started performing Cabaret with puppets. These are performances that Michael and I collaborate on, and we’re planning more. I performed at The 50th Anniversary Celebrations of The National Theatre School of Canada last year in Montreal, and I’m working on a one woman, many puppet cabaret to take on the road. There’s something about performing with puppets that hits me deep in the gut. It’s difficult to articulate, but it’s thrilling, and it’s like a leap into the unknown every time I do it. Clip from Montreal: http://www.youtube.com/watch?v=NyuTxpYxa5w

The Tentacle’s Claw is essentially a puppetry film. The tentacle is a puppet. Michael and I share a love of puppetry, we were reared on Jim Henson’s creations, and plan to use puppetry in our work as long as we live.

Be sure to check out their website for ‘The Tentacles Claw’ which has links to Facebook, Twitter and YouTube on the home page.  Bmovienation will be sure to announce when the film is completed and available for purchase.