Leggy, brunette-maned pin-up actress Caroline Munro was born in Windsor and lived in Rottingdean near Brighton where she attended a Catholic Convent School. By chance, her mother and a photographer entered her picture in a “Face of the Year” competition for the British newspaper The Evening News and won. This led to modeling chores, her first job being for Vogue Magazine at the age of 17. She moved to London to pursue top modeling jobs and became a major cover girl for fashion and television commercials while there. 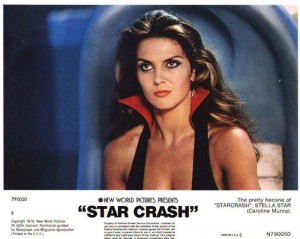 Decorative bit parts came her way in such films as Casino Royale (1967) and Where’s Jack? (1969). One of her many gorgeous photo ads earned her a screen test and a one-year contract at Paramount where she won the role of Richard Widmark’s daughter in the comedy/western A Talent for Loving (1969). She first met husband/actor Judd Hamilton filming this movie but they later divorced. Also in 1969, she became the commercial poster girl for “Lamb’s Navy Rum”, a gig that lasted ten years. She had no lines as Vincent Price’s dead wife in The Abominable Dr. Phibes (1971) and Dr. Phibes Rises Again (1972) which, in turn, led to a Hammer Studios contract and such low-budget spine-tinglers as Dracula A.D. 1972 (1972) and Captain Kronos – Vampire Hunter (1974). 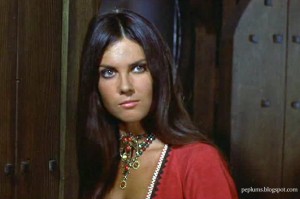 More noticeable roles came outside the studio as the slave girl/love interest in The Golden Voyage of Sinbad (1973), the princess in At the Earth’s Core (1976) and a lethal Bond girl in the top-notch The Spy Who Loved Me (1977), one of Roger Moore’s best outings in the ‘007’ series. Her voluptuous looks sustained her for a bit longer but the quality of her roles did not improve with higher visibility. By the late 1970s, she was reduced to roles in Starcrash (1978), Maniac (1980) and Slaughter High (1986).