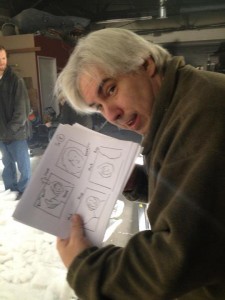 When it comes to B movies one of the biggest things that attracts us is the special effects.  With a fraction of a budget and timeframe compared to big budget films the special effects team has major challenges to overcome to provide a visually successful final product.  Joe Lawson has been specializing in special effects for well over a decade and in the last couple years has been directing more which is one of his passions.

I read and heard about visual effects taking years for some movies and you have much shorter deadlines. What’s your secret?

JOE: We’re just determined to do the best we can with the time and materials allotted. We DO have a great team of multi-talented people who make a supervisor look good. 😉 Our films, on average, take about four weeks to do the entire visual effects load from 100 to 300 shots of varying types. We do our level best to stay organized and focused on the goal… over time, we’ve grown our staff a bit to include artists from Iowa, Florida and England as part of our regular go-to folks. It’s a wonderful thing finding the right mix of in and out of house talent who, together, work in the most fast paced and demanding environment I’ve known. We learn something new (or how to do better) with every film so, with luck, we should have it ALL figured out around 2024!

One thing our team is VERY fortunate with is that The Asylum just plain GETS filmmaking at its rawest form… and they DO support our ability in VFX to achieve the goals. When there’s a bit of software kit that makes something easier or possible, they will get it (getting time to LEARN it is sometimes challenging but we’re getting there). When we quantifiably show that a new bit of hardware will help us get things done more efficiently, they’ll make it happen (even if on a budget).

The producers are like kids in a candy store and the greatest joy is when their faith pays off with a “WOW!”, a laugh or a smile in the edit bay about a VFX shot or sequence that works. I love those moments. We’ll continue to strive to make more of them.

It’s always fun to see people compare our films to gazillion dollar blockbusters not realizing they’re comparing a film with a 150,000 dollar budget to one with a 150 MILLION dollar budget. What those talented folks do with hundreds of artists over six months to a year we have to do with six to eight people in one month… so there are likely going to be some differences. Fortunately, our talented teams (not just VFX) do hit things out of the park in ways most people will never realize considering the time and resources.

At the end of the day, are you just as entertained by the Asylum film as the genuine blockbuster? Because if the entertainment value is equivalent (even if it’s taking a shot drink every time something silly graces the screen) then which of the two Hollywood studios is spending their dollars more wisely? That being said, having an amazing amount of trenches experience, I look forward to someday showing what we could do if someone DID give us a 15 million dollar budget and a year to use it!

You’ve done many different movies, is there any specific type of effect you haven’t done that you really want to?

JOE: The one thing about The Asylum is that this really isn’t a problem. Doing 30 plus films in my almost three years there means there probably isn’t an effect we’ve missed. I think it’s the striving to do some of the effects again with new tools and new understanding BETTER than before which makes it challenging and new again. I actually looked back at some of our older shots a few days ago and was realizing just how much I’d FORGOTTEN that we’d done. That happens when your team does almost 2,000 shots a year…

What was your most challenging project and why?

JOE: Nazis at the Center of the Earth, all in good ways. It was my first feature directing gig (thank you David Latt, David Rimawi and ESPECIALLY the writer of such a fun script, Paul Bales), it was a TON of effects (which I suspect is a goodly part of the reason they took the longshot chance on me), we had very harsh deadlines and financial challenges and a LOT of creative problem-solving to achieve the goal… and yet, we did it! The best part was having great teams and support every step of the way from the great cast, great crew, great VFX team, great post team, great composer, great producers, great family… it was humbling and the most creatively satisfying experience of my life. And a chance to say the word great eight times in an interview! The film has been out since April on DVD, BluRay, Video on Demand and still gets new reviews as well as, evidently, being quite popular on Netflix. Even some big budget films can’t say those things. NATCOTE definitely gets a middle split in opinions. Half hate it with an absolute passion that human instruments can’t measure and the other half feel it’s the Citizen Kane of B-movies. The third half goes along for the ride and forgets it the day after. 🙂 Clash of the Empires has to be a very close second just for the challenges of shooting in Cambodia and dealing with actors who didn’t speak a word of English but had to for the film. Between snakes, cliffs, potholes, jungles, goats, monsoons, lightning storms and dangerous locations it’s a wonder we all survived and unhurt at that!

In the last year you did the directing and special effects for three movies. First how have your directing experience been and is it easier to do the special effects since you directed the movies and have a clear vision of how you want things to appear?

JOE: Plain and simple, I love directing. It’s what I was born to do and I’ve been blessed with the opportunity to go for it three times with three very different motion pictures. The chance to work with three wonderful groups of actors and crew has been amazing and humbling… they’ve all been dedicated and gave more than they had to making the films better than anyone imagined. I’ve also learned a lot from each team to be a better director in the decades ahead. Oddly, directing hasn’t made doing VFX easier but knowing VFX makes directing easier because a) I’ve had a lot of visual training over the years, b) I have a better idea what I want to see in the end result and c) I’ve made more than enough mistakes to know what works best to get the best result. A great saying: Good decisions comes from wisdom, wisdom comes from experience, experience comes from bad decisions. I’ve made a fair amount of bad decisions in my time. Listening to the sage advice of my lovely wife Kelly and taking the chance to become a director has not been one of them.

When you completed Nazis, did you see ‘Iron Sky’ and compare the amount of VFX shots between the two movies and in generally due to budget and time constraints what is the comparison on average of VFX shots.

JOE: Honestly, I have not yet seen Iron Sky and should because I have several great and talented friends who worked on it. Definitely will. It’s hard to find the time between work and family to see a LOT of films and that one just hasn’t reached first in the queue yet. When it does, I’ll have an informed opinion. Just looking at their effects I’d say that they definitely hit an amazing mark and they should have. Consider that the budget of theirs was roughly one hundred times (almost 10,000,000 vs 150,000) NATCOTE’s and then draw your conclusions about why films look different from one another. Then just imagine what either film team could do given a thousand times the budget! 🙂