Robocop isn’t a terrible movie. While that may not sound like a winning endorsement, the remake actually does a few things right.

The original Paul Verhoeven classic is very much a product of the ’80s and uses ultra-violence as well as its B-movie trappings to mask a biting satire of American culture.

Much like its title character, Brazilian director José Padilha and writer Joshua Zetumer strip the old for parts and graft on a commentary about the use of drones and today’s highly politicized culture.

Set in the near future, autonomous robots patrol the world in place of American troops and are granted the authority to eliminate perceived threats. The U.S. government bans the use of the machines within its borders as the public fears granting these metal warriors the ability to make life-and-death decisions.

When Detroit police detective Alex Murphy (Joel Kinnaman) is injured in the line of duty, the global defense company OmniCorp seizes the opportunity to literally put a new face on its product in an attempt to win the people’s trust.

While the original possessed a dark sense of humor, the update at times takes itself far too seriously and, as a result, discards much of what made the original a classic in the first place.

Although the film loses most of the heart of its predecessor, a stellar supporting cast helps to keep everything afloat. Gary Oldman, Michael K. Williams, Michael Keaton and a criminally underused Jackie Earl Haley turn in fantastic performances.

Padilha, directing his first English-language film, is best known for his two Elite Squad movies and in Robocop displays his eye for on-screen action. A thrilling sequence set in a pitch-black warehouse, lit only by gun flare and the occasional first-person infrared image is dizzying, but never confusing.

Although fans of the original complain that a hyperviolent and gory R-rated film could not and should not be watered down to a PG-13 movie, this version is not without its own stomach-churning moments.

After first awakening from his transformation into a cyborg, Murphy is allowed a view of what little remains of his body underneath the metal exterior. For a brief moment, the true horror of his new life is on full display.

The film could have used more of these quiet moments of revulsion and left the numerous, half-fleshed-out ideas surrounding the use of drones on the operating room floor.

A kernel of a great movie is hiding inside Robocop (Hint: It’s called Robocop and was made in 1987). But what’s there isn’t that bad. 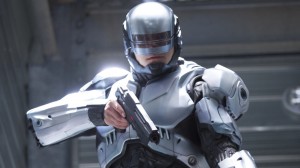