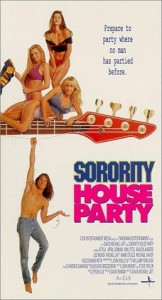 The hottest rock star in the world is held hostage by the sorority babes on campus.  Little do they know that his manager has put a hit out on the rock star and the sorority needs to protect him.

Prior to starting up The Asylum, David Michael Latt and David Rimawi were making their own films. Their 1992 “Rock and Roll Fantasy” pre-Asylum has recently been added to the Netflix streaming list.

The kidnapping by sorority sisters Alex (April Lerman) and Bre (Kim Little) sets up a romance between Alex and  the rock star Jamie Z, (Attila, who you may recognized from John Carpenters “Body Bags” as the man with beautiful hair?!) The hitmen hired by Jamie Z’s manager is a father son team.  The son is in hitman in training, but he’s a college graduate, health conscience, spiritual, and scared of guns trainee that does not want to be a hitman. 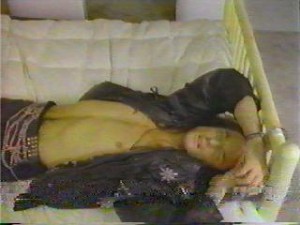 “Rock and Roll Fantasy” is a 1992 film, but it’s filled with 80s style, parties, boobs, big hair, and of course cheesy one liners including, “Sorry, I’m busy flossing my cat,” or the stoner “And then the cheese spoke to me” and of course you have the quick, discreet Binaca breath spray before talking to a girl and yes, they still make Binaca!

If you enjoy “Rock and Roll Fantasy” then check out another early David Latt film “Jane White is Sick and Twisted” which is available on DVD.  If you appreciate 80s TV and films, Jane White can be a great drinking game anytime there’s a 80s reference.