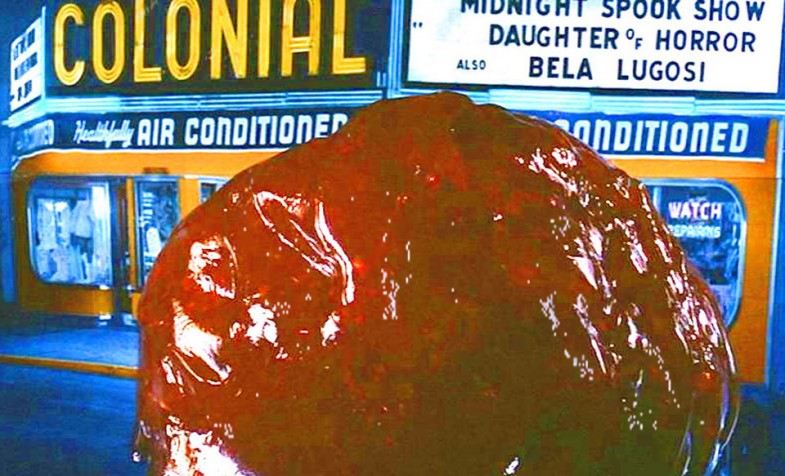 The Blob is an independently made 1958 American horror/science-fiction film that depicts a giant amoeba-like alien that terrorizes the small community of Phoenixville, Pennsylvania. In the style of American International Pictures, Paramount Pictures released the film as a double feature with I Married a Monster from Outer Space. There is a sequel and a remake but “the blob” is the original created in 1958.

The film was Steve McQueen’s debut leading role, and also starred Aneta Corsaut. The film’s tongue-in-cheek theme song, “Beware of the Blob”, was written by Burt Bacharach and Mack David and became a nationwide hit in the U.S. It was recorded by studio group the Five Blobs—actually singer Bernie Nee overdubbing himself.

The film was originally titled The Molten Meteor until producers overheard screenwriter Kay Linaker refer to the movie’s monster as “the blob.” Other sources give a different account, saying that the film went through a number of title changes before the makers settled on The Glob, then hearing that cartoonist Walt Kelly had used The Glob as a title for his children’s book, and mistakenly believing that they could no longer use it as a title, they changed it to The Blob.

The Blob was directed by Irvin Yeaworth, who had directed more than 400 films for motivational, educational, and religious purposes. Though the budget was set at US$100,000 it ended up costing $110,000.

The Blob was filmed in and around Valley Forge, Pennsylvania. The primary shooting took place at Valley Forge Studios, and several scenes were filmed in the towns of Chester Springs, Downingtown, Phoenixville and Royersford, including the basement of a local restaurant named Chef’s. (The setting is apparently Downingtown Pennsylvania itself as the one policeman identifies his department’s office as “Downingtown HQ to East Cornwall HQ” over the two-way radio during his chess game, and the final scenes take place in a restaurant that is clearly labeled “Downingtown Diner”.) It was filmed in color and widescreen.

For the diner scene a photograph of the building was put on a gyroscopically-operated table with cameras mounted. The table was shaken and the Blob rolled off. When the film was run in reverse it appeared to be oozing over the building.

McQueen received only US$3,000 for this film; he had turned down an offer for a smaller up-front sum with 10 percent of the profits because he did not think the movie would make any money and he needed the money immediately to pay for food and rent; it ended up grossing US$4 million.

Though legend has it that the opening novelty song was composed by a young and unknown Burt Bacharach (along with Hal David, Burt’s famous songwriting partner), Bacharach had already achieved some measure of success by the time the film was released, and the lyrics to the song were composed by David’s brother Mack.

The background score for The Blob was composed by Ralph Carmichael. It was one of just a few film scores that Carmichael wrote. Carmichael is best known for his musical associations with Billy Graham and for arranging the popular Christmas album by Nat King Cole. Carmichael also composed the original theme for the film, entitled “Violence” on the soundtrack album, which started the film on a serious and frightening note. It was against the director’s wishes to replace the original theme song with that by Bacharach/David. However, because the latter encourages audiences to view The Blob as campy fun, it has contributed to the film’s enduring popularity. Both Carmichael’s score and Bacharach/David’s song were released in 2008 by the Monstrous Movie Music soundtrack label.

0 119
Exploring the Universe, One B-Movie at a Time

0 134
Grabbing Your Own Wheel, Movie Style