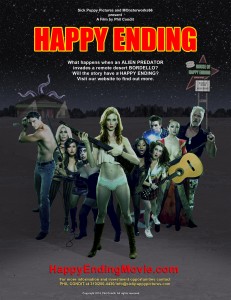 Who doesn’t like a happy ending?  As Sick Puppy Pictures and MOnsterworks66 film Happy Ending continues to gain a lot of interest as production proceeds.  Happy Ending is a hot and hilarious romp of a scifi-horror comedy feature that chronicles what happens when an alien predator invades a remote desert bordello, forcing the Working Girls and their Johns to fight for their lives…and humanity’s survival!  With a cast consisting of super hookers, a super Madame, Johns, and special effects will be provided by the great Cleve Hall.

Meet the women of Happy Endings:

Happy Ending was born out of the mind of Phil Condit, the filmmaker behind Empress Vampire (aka Empress of the Evil Dead) and the force behind SICK PUPPY PICTURES. When asked about the film he said, “I was trying to come up with a premise for a creature feature that would use limited locations to help keep the costs of the production low. The location needed to be one populated with scantily clad women (a staple of low budget horror films) and remote enough to cut the characters off from rescue.  Strip Clubs have been used many times for the scantily clad women, but they generally aren’t in remote locals.”

One exciting thing Happy Endings has to offer is a kick-ass range of film-branded merchandise.  Check out the full range of goodies including tshirts, bags, mugs and a calendar at: http://happyendingmovie.com/store.html

For more information about the film check out all the Happy Ending sites: