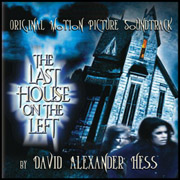 David Hess may scare you on the screen but he’s a pussycat in person. He can roar and hiss, sure, but he can also purr like the talented tiger of many stripes he is. David was already an accomplished musician before he was offered the defining role of his film career, the amoral killer/rapist Krug in Wes Craven’s seminal horror hit The Last House on the Left (1972), now available on Special Edition DVD and recently remade. The fledgling filmmakers found out about his history of hit-making (including the single “Two Brothers”) as a songsmith, and asked him to provide the music as well as the mayhem for this insidiously influential and lucratively offensive surprise (to them!) smash. The 20 tracks, all from the original session tapes, include three bonuses not featured in the eventual release. The haunting hippie ballads “Wait for the Rain” and  “Now You’re All Alone” underscore several of the tracks, evoking a chilling but dreamy sense of alienation (the latter played over the infamous rape scene as intentional counterpoint.) In addition to the vocals, all sung by David with pleasantly period folksiness, there are several instrumental tracks as well, offering a complete aural reproduction of the film’s various and violent mood-swings. It’s hard to believe that the maniac on screen is also the sensitive artist providing the offbeat, seemingly out-of-sync but oddly complementary score. This soundtrack is just as essential to the collection any self-respecting grindhouse film buff as the movie itself. You can (and should) order this landmark soundtrack (limited edition, hurry!) directly from David, as well as many other of his CDs, on his web site here.