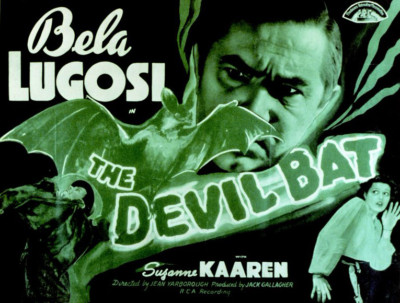 Movies from the “golden age” of black and white films (approximately the 1930’s through the 1950’s) almost invariably contain well-written dialogue and strikingly subtle humor, making them a favorite among many fans of cinema. The horror movies of this more subtle period in film history are therefore of a cerebral nature, primarily relying on the viewer’s imagination to generate the true sense of horror that modern movies generate through more visual means. It is these oft-ignored horror movies that will be the focus of a series of articles detailing the reasons why true fans of horror movies should rediscover these films.

The Devil Bat is a minor cult classic. Lovers of the Poverty Row horror films consider this one of the most enjoyable movies from the B movie companies of the 1940′s. Boosted by the presence of Bela Lugosi, the film enjoyed enough success to spawn a sequel (Devil Bat’s Daughter, 1946), but that sequel had nothing to do with its predecessor. Rather, it was a sequel in name only.

Set in the fictitious town of Heathville, The Devil Bat tells the story of Dr. Paul Carruthers and his fiendish plot to use a scientifically-enhanced giant bat to kill the owners and family members of the Heath-Morton cosmetics company. His motive, as if he needed one in a movie like this, is rage at having sold his grease-free cosmetic recipe to the Heath-Morton corporation – a decision that led the Heaths and Mortons to become rich while Dr. Carruthers continued to labor in upper middle class comfort (how horrible for him) as an inventor of perfumes and after shaves.

Why This Movie Has Been Forgotten

As mentioned previously, The Devil Bat has a minor cult following among B movie fans, but the larger horror-loving audience has mostly misplaced all memory of this film. There seems to be only one reason for this memory loss -the plot is quite ridiculous. Would even a mad scientist such as Carruthers really come up with such an elaborate plot to kill his enemies? While I’m all for science, I don’t think I would waste my time on the “glandular stimulation through electric impulses” that resulted in the giant bat he uses in his murderous schemes. On top of that, it was necessary to train this giant bat to become vicious and enraged at the smell of a new after shave invented by Carruthers. And finally, Carruthers had to convince each of his victims to put his new after shave on at night in order to prevent the smell from evaporating before the bat could be released. I think I’d just shoot my enemies instead.

Why Horror Fans Should Watch This Movie

Bela Lugosi gives a good performance as the vengeful Dr. Carruthers, and his goggles are infamous for their appearance.
Unlike many of the Poverty Row pictures, which were often produced in haste with very little budget for acting talent, every member of the cast can act. From future western star David ‘Tex’ O’Brien (as reporter Johnny Layton) to King of the Zombies star Guy Usher (as Henry Morton) to Looney Tunes starArthur Q. Bryan (as newpaper editor Joe McGinty – and the voice of Elmer Fudd in Looney Tunes epsisodes), the cast does a marvelous job of acting.
The scenes with Lugosi are priceless examples of early Hollywood horror. Not only does Carruthers (Lugosi) have a typical mad scientist’s laboratory complete with Frankenstein-like electrical equipment, secret doors, and bubbling beakers but he also conducts his murders with typical two-dimensional and unmerciful ruthlessness.
Lugosi’s experiments are downright hilarious. He starts by fetching his devil bat from the hidden attic (a hidden attic with a window that opens to the outside world for all to see, by the way). The bat is hanging from a device that can only be described as a clothes hanger, which is quite fortunate because that clothes hanger fits perfectly into a device in the electrical room where the “glandular stimulation through electric impulses” is performed on it while Lugosi stares at the bat through a glass window in the room’s door. Of course, any such experiment involving heavy use of electricity requires protective goggles, doesn’t it? And obviously those protective goggles should have absolutely no shading to protect your eyes, right? As the experiment continues, the bat grows in size to almost the size of a man. The deranged Dr. Carruthers then checks on his subject with a stethoscope (?) and, lastly, makes sure the bat hates the smell of a new after shave lotion designed by Carruthers. The bat is now ready for murder!
Lugosi’s character is constantly spouting villainous lines to his intended victims, yet somehow they never figure out that they are going to die. Each time he convinces a potential victim to place the after shave on the “tender part of the neck”, he ends the encounter with a sinister “goodbye”.
A plethora of poor decisions by the cast adds some unintended comedy to the movie. For example, “One Shot” McGuire decides to fake a photograph of the devil bat for publication in the newspaper. For some odd reason, he decides to have a fake bat attached to a line on which it slides (flies) into camera range. The problem here is that McGuire isn’t making a movie about the bat, he is simply taking a photograph. So why would he need the fake bat to be “flying” when he snaps its picture? Couldn’t it just be hanging on the wire?
And finally, who can resist a movie with such trite effects as having the experimental after shave lotion actually be labeled as such? One can’t help but be reminded of those 60′s Batman episodes where even the most unnecessary item is labeled (remember the “water proof loot sack” used by, I believe, the Riddler when he was performing an underwater robbery?).

The Devil Bat is quite deserving of its cult following. While it may be a low-budget film, it is vastly entertaining and definitely worth spending 69 minutes of your life.