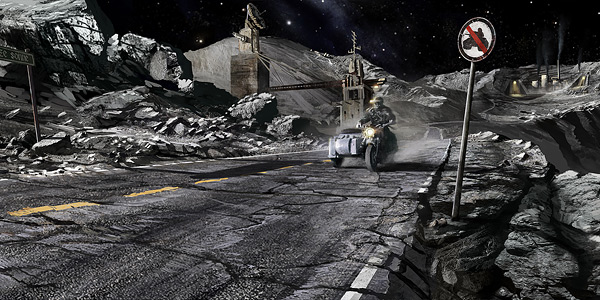 A sci-fi black comedy about Nazis from the moon invading Planet Earth is one of the hottest tickets at the Berlin film festival, which is better known for its gritty political fare.

“Iron Sky”, a B-movie spoof drawing the crowds at the 11-day event in the German capital, imagines that Hitler’s surviving henchmen set up a lunar colony after the fall of the regime in 1945, biding their time to strike back.

The opportunity comes in 2018 when a US astronaut exploring the dark side of the moon comes face to face with a Nazi soldier clad in a black uniform and a breathing mask.

Behind him, a secret military base shaped like a swastika looms into view, prompting giggles from the packed audience.

The intergalactic farce produced mainly in Finland pits the would-be Fourth Reich against an America led by a Sarah Palin double, who is seen incessantly jogging in the Oval Office.

“This basically came from a stupid joke dreamed up after a trip to the sauna,” said director Timo Vuorensola, who generated much of the financing for the film among fans online.

“But we couldn’t get the idea out of our heads and we got more and more ambitious as we worked on the story.”

The film-makers see themselves as part of a long line of eccentric cinematic dreamers such as Ed Wood, the 1950s cross-dressing kitsch impresario immortalised by Johnny Depp in a 1994 movie of the same name by Tim Burton.

Just over 90 minutes long, the film screening in the festival’s Panorama sidebar section shows the black astronaut’s skin being bleached white by a Nazi mad scientist, SS officer Klaus Adler, who dreams of becoming the next Fuehrer.

The space Nazis use airships shaped like Zeppelin dirigibles and a giant craft called “Twilight of the Gods” to launch a batty Blitzkrieg, while an Earth-based coalition of the willing deploys a navy cruiser called the USS George W. Bush.

The special effects are little to speak of compared to the film’s Hollywood antecedents but the 7.5-million-euro ($9.9-million) movie is long on imagination.

Beyond the high concept, the film has also attracted attention for its innovative financing model: donations on the Internet, which ended up covering the total budget from supporters around the globe.

Its producers say “Iron Sky” is one of the first films to successfully use “crowd sourcing” to generate cash, and are also launching a series of prequel comics, video games and licensed merchandise.

The Berlinale, the first major European festival of the year, runs to February 19.