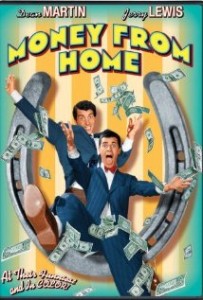 Money From Home was Martin&Lewis’s first film in color and it is set during the Roaring Twenties and based on a Damon Runyon story from that era. With such character players as Sheldon Leonard, Robert Strauss, and Jack Kruschen playing Runyon’s classic gambler creations of the era you know that at least that part of the film is more than satisfying.

Dean Martin always casts well as that type and seeing Money From Home was a painful reminder of what a shame it was that Dino never got to play Sky Masterson in a planned TV special that never got off the ground in the middle Sixties. What a perfect part that would have been for him. His part in this film is a Sky Masterson type, a smooth talking lady’s man who is dispatched to Maryland to fix a steeplechase race either by persuading owner Marjie Miller to scratch the horse or by having his dopey cousin, veterinarian trainee Jerry Lewis dope the horse.

Money From Home never quite gets off the ground in terms of comedy. Jerry has been far funnier in other films both with Dean and one his own. The steeplechase race climax where Jerry substitutes for perpetually inebriated jockey Richard Haydn is lifted straight from the Marx Brothers classic A Day At The Races. As for Dean’s singing he gets some truly forgettable numbers which he never recorded for Capitol records and he also sings I Only Have Eyes For You for which Paramount must have ponied some big bucks to Warner Brothers for the rights. Sad Dino never recorded that one because it fits him well.