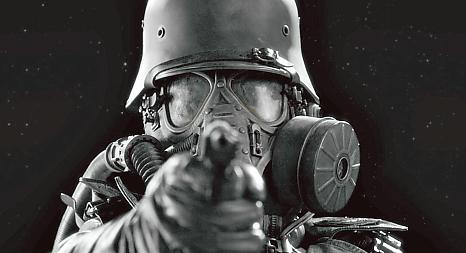 Is it tactless to screen a comedy about Nazis in Berlin? Perhaps. A film dreamed up by Finnish young men about Nazis on the moon, their discovery by American astronauts, and the ideological conflict that ensues, has nevertheless been one of the big topics of conversation at the Berlin Film Festival.
The feeling was positive at the packed press screening on Saturday evening. The people sat through it to the end, and viewers that I spoke to saw it as a successful B-movie. The press conference on the Potsdamer Platz was full of empty seats, which suggests that Iron Sky was seen more as an amusing anecdote than great art.

Iron Sky is a science fiction comedy combining two brands of entertainment cinema: evil Nazis and sci-fi adventure. The script was written by Johanna Sinisalo and Michael Kalesniko. “The role of political satire became quite considerable”, says director Timo Vuorensola.
“Everything linked with the topic of Nazis was on the table. We finally trimmed away much of the original script, and we had to concentrate. The mass murder of the Jews was certainly a topic that came up, but we saw that there is no humour to be gleaned from it.”

At the press screening international journalists seem to have especially enjoyed the inside jokes in the field of cinema that were written into the script. One example of such humour was the a scene that borrows from a sequence in the film The Downfall – the scene out of which hundreds of humorous subtitled versions have been made.
“The script is amazing. Films like this are not made in Germany, with the exception of Tarantino. We have much resistance”, says Oliver Damian the film’s German co-producer.

Feeling some apprehension was the German Julia Dietze, who played the main role. She said in Berlin that it was hard at first to get used to a Nazi uniform. “I have many Jewish friends, and Nazism has always been seen as a serious matter. My take on the issue is different from that of the Finns”, Dietze says.
“The critical angle of the film nevertheless goes against the Nazis. The most difficult scene was the one in which I had to teach the ideology. I told myself that this is just a role.”

The work of the fans has taken a central role in Iron Sky. Vuorensola emphasises that the fans have influenced the film. “But we have not had 20 directors. A group of fans has been used when necessary, and it does not impose any artistic obligations”, Vuorensola says.
This is only the second film that Vuorensola has made. “I wanted to do more space battles. I like them.”

Piracy will be a special challenge for Iron Sky, as the emergence of the film is powerfully linked with the internet. The filmmakers have embraced it without fear. Piracy is a problem more for the business and distribution end, Vuorensola emphasises. “I hope that people realise that we have been doing this for six years.”