Pernicious the James Cullen Bressack film has exploded with attention after the reviews poured in praising the film, Bressack, and the stunning cast.  Now an official release date of June 19th is set as the film heads to the theaters and VOD.  Check out the B Movie Nation review below and mark your calendars for the release date.

Directed by James Cullen Bressack, Pernicious has it all, horror, mystery, action, thrills, and cringing moments that will be stuck in your mind for eternity.  The only criticism about Pernicious is that it ended. The stunning cast of Ciara Hanna, Emily O’Brien, and Jackie Moore are easily one of the best female trios in a horror film.  They have the talent, beauty, and all three of them will shock and surprise you in their own unique way.

Synopsis:
Three young, beautiful girls arrive in Thailand to teach English for the summer, some with noble intentions and some just wanting an adventure, but none were prepared for the massacre that awaited them.

The nightmare begins when their new friends go missing, vivid bloody dreams haunt their sleep and a stolen statue leads them down a dark path into Thai folklore and magic that has been long forgotten. Their situation continues to become worse once they realize it’s not WHAT that is haunting them but WHO: an eight-year girl, brutally murdered and sacrificed by her family decades ago who wants nothing more than to watch them bleed. 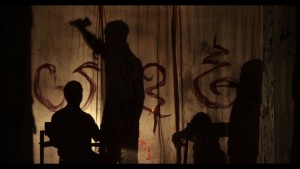 Onto the film, the girls arrive in Thailand and there’s no lull waiting for action and horror. Soon after they arrive they encounter a golden statue of a little girl in the house they’re staying at and inadvertently release the demon girl inside.  That night the girls party with some guys they meet in a bar and end up bringing the guys back to the house.  Apparently possessed by the demon, the girls perform some brutal torturing techniques that will give you nightmares for years to come.  It’ll make any guy think twice about hooking up with some pretty party girls in Thailand. 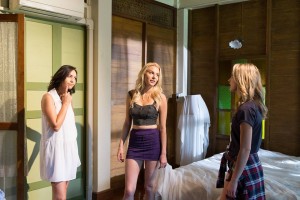 The next morning the girls all believe the torturing was a dream and that the guys roofied them.  They then realized that they’ve been robbed of their personal belongings and the golden statue is gone.  The girls are determined to find their belongings, but after bizarre frightening instances keep happening, the girl’s priority changes to finding out what is going on and research the statue. 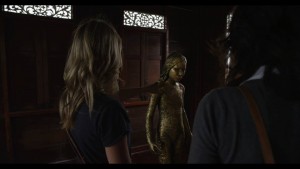 The more they learn about the statue and its history, the more tense the situation gets.  The bizarre and frightening happenings intensify which puts the girls on the verge of insanity.  As the momentum keeps building it makes you very curious how it will end and whether the girls will survive.  When the ending of the film does come, it will not let the audience down. 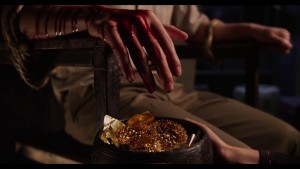 From the first scene through the final rolling credits, the story, Ciara, Emily, Jackie, the scenery, the mystery, and of course the horrific scenes all combined will keep you glued to the screen.

If you have some thoughts to share about this article or you’dlike to discuss B movies with other B movie fans and filmmakers please visit our B Movie Nation Facebook group.