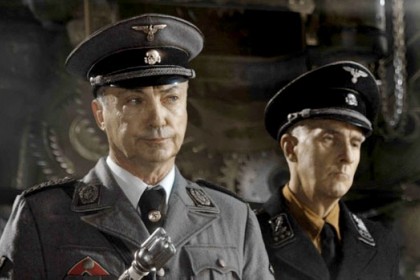 FINNISH sci-fi comedy about Nazi astronauts invading the earth has become the surprise hit of the Berlinale film festival. Iron Sky, made in the finest tradition of B movie, is the most talked-about film outside the main competition.

It takes as its premise the conspiracy theory that by the end of the Second World War the Nazis have established a secret base in the Antarctic. From there, they launch a mission to the Moon, where they establish a swastika-shaped bunker.

Cut to 2018 and the Nazis’ descendants return with a huge fleet to wreak a space-age Blitzkrieg on the earth. More improbable perhaps even than Nazi Moon men is the depiction of the US president as a woman bearing a strong resemblance to former Alaska governor Sarah Palin.

Director Timo Vuorensola says this and other themes satirising US politics has meant that more Americans than Germans have been offended by Iron Sky.

He told The Wall Street Journal: “It’s a funny thing, you make a movie about Moon Nazis and the people who get offended are the Americans.

“I was expecting the Germans to take it badly… I find that when you make fun of Americans, but you aren’t an American, it’s not always accepted.”

Iron Sky has created a massive buzz among audiences at the Berlin Film Festival, where only Don: The King Is Back, a Bollywood blockbuster, has received more hype. That’s because it stars Shah Rukh Khan, who, as The Independent explains, is a long-time favourite with Berlin crowds.

Online, the Iron Sky trailer (below) has been viewed more than 5 million times – though it seems destined to be loved by audiences and hated by critics.

In a two-star review, The Guardian’s Andrew Pulver called it “one giant damp squib”. While it looks impressive, he says, it is “not nearly as funny or cruel as its killer premise suggests”.

In the Hollywood Reporter, David Rooney also bemoans the dearth of jokes: “There’s lots of good stuff here, just not enough subversive wit in the writing or skilled comic delivery from the cast. The nagging thought keeps arising that this is a comedy made by people with a feeble sense of humour.”

Time Out observes: “The kind of satire at work here – essentially, comparing American might to that of the Third Reich – is best when it’s underplayed. Instead Iron Sky chooses to trade in crass, trouser-dropping, pie-in-the-face slapstick.”

Iron Sky carries on regardless, with world domination for the Moon Nazis seemingly inevitable. The film-makers have closed a deal for a north American release – and it will even be shown in Israel. In Britain, it will be released on 4 April.