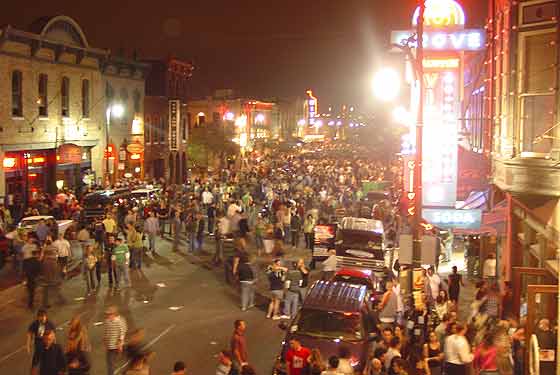 Last week, SXSW announced the feature film lineup for the 2012 Film Festival, and today we’ve heard word about the short films and midnight screenings that will be headed our way this March. In recent years, some of my favorite finds at SXSW have been short films, and here’s hoping this year is no different.

Two of the programs will especially focus on films by Texans: Texas Shorts and Texas High School Shorts. A large slate of music videos is also in the lineup, including one by Austinite PJ Raval for Christeene (“African Mayonnaise”). Among the 135 shorts screening at the festival:

Kat Candler’s Hellion is part of the Texas Shorts program. The Austin filmmaker’s short premiered at Sundance earlier this year. In his Sundance preview, Don calls it “an unexpected twist on how fathers, sons and brothers deal with other.”
Using stop-motion animation, Abuelas reflects on the past violence in Argentina through a grandmother’s narration. I caught this beautifully haunting short at AFF. It returns to Austin through the SX Global Shorts program.
Remember how 12 Monkeys was a long-form remake of the 1962 short La Jetee? Well, Life and Freaky Times of Uncle Luke takes the French short to modern-day Miami and throws in 2 Live Crew’s Uncle Luke. What say you, Terry Gilliam?
A TV on the Radio documentary! Minor/Major: The TV on the Radio Documentary depicts the band as they delve into the world of major label recording.
Marieka Walsh’s short The Hunter uses stop-motion sand animation to tell the tale of a hunter searching the wilderness for a missing boy.
Winnebago Man’s Ben Steinbauer directs documentary short BRUTE FORCE, about Apple Records recording artist Brute Force. Somewhat related: our Slacker 2011 interview with Steinbauer.
Once It Started It Could Not End Otherwise is included in the animated shorts program. Houstonian Kelly Sears helmed this horror flick which showed earlier this year at Sundance [Don’s post]. Sears was awarded a Texas Filmmakers Production Fund grant in 2011.
Part of the Midnight Shorts program, J.P.B.F. is directed by Steve Collins (whose You Hurt My Feelings showed at last year’s AFF). YHMF actors Courtney Davis and John Merriman star in this comedy in which a woman interviews at a questionable company.
Knife, directed by James M. Johnston, depicts a Texas tale of greed and vengeance. Johnston hails from the DFW-area and produced SXSW 2011 award-winning narrative short Pioneer.
Ben and Joshua Safdie’s The Black Balloon showed at Sundance. In this narrative short, a man loses control of a bunch of balloons. A lone black balloon from this bouquet learns about the human condition.
Don Hertzfeldt’s “Everything will be OK” trilogy closes with the animated short “it’s such a beautiful day”. Bill is in the hospital dealing with memory issues.
In Bill Plympton’s latest animated short, Summer Bummer, a man ponders what horrors his backyard pool might be hiding.

SXSW Senior Programmer and Operations Manager Jarod Neece comments about the films chosen for the Midnighter showcase, “This year’s program includes both veteran names with anticipated follow-ups and fresh discoveries with new voices, and charts otherworldly, insane territories that breathe new life into horror conventions.” Along with a super-secret screening, the 11 movies include:

Juan Carlos Frenadillo’s Intruders. Making its American premiere at the fest, this flick stars Clive Owen. Two children in different countries are haunted by a faceless being.
John Dies at the End premiered at Sundance. While including the Paul Giamatti film in their 20 Best Films of Sundance list, NYMag calls it “by far the most completely batshit crazy B-movie at the festival.” Which is nothing to shake a stick at, right?
Indonesian thriller Modus Anomali will have its world premiere at SXSW. A father searches for his two children who disappear in the forest during a family vacation.
The Tall Man (world premiere). Jessica Biel stars as a mom trying to find her missing child who may have been abducted by a mythological figure.