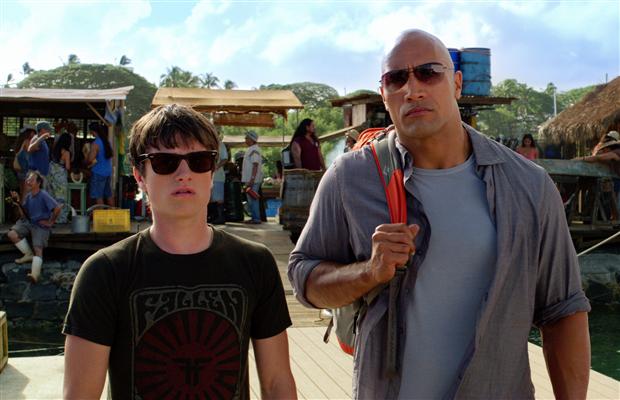 In this sequel to Journey to the Center of the Earth 3D, we catch up with young Sean Anderson (Josh Hutcherson), now a bit older and getting into all kinds of mischief. Sean’s mom (Kristin Davis) and step-dad Hank (Dwayne Johnson) try to pry the reason for his bad behavior out of the recalcitrant teen, and Hank finally manages to get the answer: Sean is trying to piece together the mystery of his missing grandfather, Alexander Anderson (Michael Caine), who went searching for a mysterious island of legend.

Working together, Sean and Hank decode a message from Alexander based on the famous adventure tales of Jules Verne, Robert Lewis Stevenson and Jonathan Swift. Sean immediately sets his sights on the island of Palau, the next step to locating his grandfather, and Hank – trying to bond with the boy and/or exhaust his curiosity – decides to chaperone the journey.

In Palau, Hank and Sean meet Helicopter tour guide Gabato (Luis Guzmán) and his daughter Kailani (Vanessa Hudgens) – who is pretty enough to make Sean risk a flight on her rusted copter into the eye of a hurricane that just so happens to hide the entrance to the mysterious island. Once they are (crash-)landed on the island, the party sets out to find Alexander – and then, find passage off of the mystical land mass before it sinks back into the sea, taking them with it.

Journey 2: The Mysterious Island is one of those “good for what it is” films – and what it is, is a light-hearted, family-friendly adventure film in the vein of Goonies or Honey I Shrunk the Kids (only not that good). The film is filled with cheesy dialogue and jokes, one-dimensional characters and an overdone plot that offers just a few notes of genuine heart or drama – but none of that really matters in this context. Kids will have fun with the material, and the adults accompanying them will be reasonably entertained as well.

Director Brad Peyton (Cats & Dogs 2) crafts a suitable visual experience via some nice tropical locales and striking (but obvious) green-screen and CGI effects. Journey 2 is not likely to win any technical awards – but again, in the context of a kids’ film, the visuals are sufficient. The 3D certainly adds to the fun – though it’s more often than not used in that pop-out, ‘in-your-face’ manner meant to capture the fleeting attention of youngsters. But, to be fair, any movie that spends time showcasing The Rock bouncing CGI berries off of his pecs is just out to have a good time, rather than impress with its technical prowess.

Of course, all the silliness would be too much if not for the cast of actors who manage to ground it, and Dwayne Johnson and Michael Caine are two of the main reasons why this film works as effectively as it does. Both are great leading men in their own right, and the contentious relationship between Hank and Alexander (as Sean’s competing paternal figures) creates some great banter, which are probably the movie’s best moments.

Josh Hutcherson has become something of a bigger name since his first Journey film, but he does a good job holding the screen and potraying a somewhat layered protagonist – good qualities in a young lead. Hutcherson’s chemistry with Johnson is also strong, and certain moments between Sean and Hank even manage to be somewhat moving as the film progresses.

Hudgens doesn’t offer much except her pretty face (not that she’s required to) and Guzmán gets the task of playing the irritating comic relief character – which he is certainly successful(?) in doing.

On the whole, Journey 2 is just a fun ride from beginning to end. It’s not a piece of classic cinema by any means, but between some great set pieces, a healthy mix of non-threatening action, (chessy) kid-friendly comedy, and some likable leading performers, you can easily set this Journey above the one that proceeded it.

Journey 2: The Mysterious Island is now playing in 2D and 3D theaters.