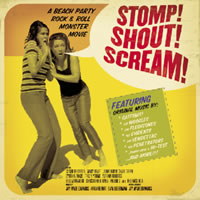 Juicier than a Georgia peach and wilder than a Georgia beach (during a hurricane), this retro-rocket blast of a soundtrack to the 2005 cult surf-monster movie Stomp! Shout! Scream! (now available from Monogram Releasing) is a ready-made party-time smash. The fourteen tracks include all five period pitch-perfect all-girl garage rock numbers by Catfight! (dubbing The Violas in the film) from the original soundtrack, plus guest performances by The Evidents, The Hate Bombs, The Woggles, Jonny Knox and Hi-Test, The Vendettas, The Penetrators, the Clutters, the Fleshtones, and Tiger! Tiger! The result is a monster mish-mash of good ol’ fashioned kickass rock ‘n’ roll, pulsating with ’60s garage-punk-surf attitude but timelessly danceable and listenable. This is a mini-jukebox of jumpin’ gems. Highlights include Catfight’s title tune and their hilarious lovelorn ballad “Syphilis,” The Clutter’s cover of the classic “Tainted Love,” the Kinks/Yardbirds inspired head-tosser “Shake” by the Hate Bombs and…hell, it’s all great. More on the music, and the film, here. Cowbabunga!