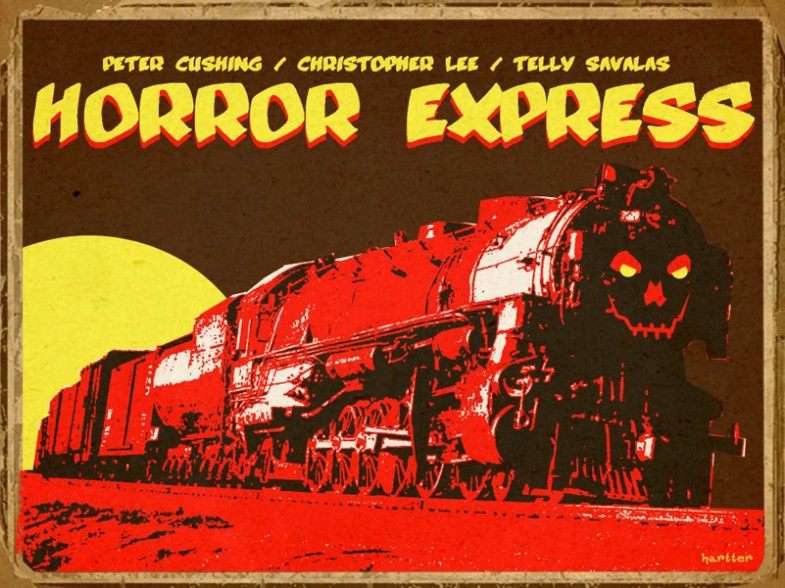 Part period adventure, part sci-fi thriller and part creature feature, Horror Express (1972, aka Panico en el Transiberiano) is an eclectic international production that was shot outside Madrid, Spain and was distinguished by the participation of Christopher Lee, Peter Cushing and Telly Savalas. Borrowing liberally from The Thing from Another World (1951) with perhaps a touch of The Thing That Couldn’t Die (1958) and some elements from any number of murder mysteries set on trains, Horror Express opens in a remote, snow-covered region of Manchuria, where Professor Alexander Saxton (Christopher Lee), discovers the frozen corpse of an ape-like creature which could be an important anthropological find. Attempting to smuggle the humanoid specimen out of Russia and back to London on the Trans-Siberian Express, Saxton encounters resistance to his plan when his scientific rival, Dr. Wells (Peter Cushing), boards the train and tries to view his top secret cargo. Once the prehistoric carcass thaws, however, it proves to be very much alive and capable of sucking brains dry through its deadly stare, accumulating the sum intelligence of its victims. Soon the creature escapes its crate through Wells’ meddling and begins to systemically work its way through the car claiming new bodies as Saxton and Wells join forces with the other survivors to stop it.

A horror fan favorite since its initial release, Horror Express flourished in poor quality, gray market VHS versions for years and built up a sizable cult following in the process which has recently been rewarded with a much improved Blu-Ray upgrade of the movie from Severin Films. While no unsung masterpiece, the movie, directed by Eugenio Martin, is a briskly paced, highly entertaining action-adventure with enough horrific touches to please genre fans but also enlivened by some tongue-in-cheek humor (Telly Savalas’s lively cameo appearance as a bullying Cossack officer) and quirky characters such as a wild-eyed Russian priest who appears to be modeled on Rasputin.

Despite its B-movie origins, Horror Express is a stylish, handsomely designed production with an intriguing backstory and a renowned cast and crew. It was produced by Bernard Gordon, a blacklisted screenwriter (Hellcats of the Navy, 1957) and director, who began working in Spain for writer/producer Philip Yordan in the sixties on such films as 55 Days at Peking (1963), Circus World (1964) and Custer of the West (1967). Yordan wanted to recoup the investment he had made on a train for the 1972 production Pancho Villa (aka Vendetta) so reteaming the producer (Gordon) and director (Martin) of that, the trio recruited screenwriters Julian Zimet and Arnaud d’Usseau and concocted a storyline that was set primarily on their expensive asset.

Christopher Lee and Peter Cushing were both cast as leads in Horror Express and production was already in progress when Cushing arrived in Spain to tell Bernard Gordon that he felt unable to commit to the project as he was still in deep mourning for his wife who had recently died. However, Christopher Lee, a close friend of Cushing, assured the producer and director that he would handle the situation and obviously coaxed his fellow co-star into making the movie to everyone’s relief. The teaming of the two iconic Hammer Horror actors gives Horror Express a touch of class and bears some similarities to their rival characters in The Creeping Flesh made the following year. As for Telly Savalas, who began appearing in numerous European films in the late sixties, he displays a much more unpredictable and spontaneous approach to acting in his colorful cameo which stands out from his costars’ more classical training. Other notable cast members include German actress Helga Line (Nightmare Castle, 1965) as a glamorous Mata Hari-type spy and Alberto de Mendoza as the fearful Russian priest who eventually becomes the slave and vessel of the demonic being on the train; de Mendoza is well known among fans of European genre films for his appearances in many spaghetti westerns (A Bullet for Sandoval, 1969), giallos (Lucio Fulci’s A Woman in a Lizard’s Skin, 1971) and crime dramas (The Boss, 1958).

Director Martin stated in an interview in a Severin DVD supplement that the special effects for Horror Express were a challenge and that the special contact lenses used by the actors as they were being hypnotized by the creature were troublesome. The lenses were so thick the actors couldn’t see what they were doing and often bumped into furniture or the sets, requiring Martin to do cutaway shots. Nonetheless, Martin imbues the film with an escalating sense of doom and imaginative visual touches such as an alien eyeball autopsy (the creature turns out to be an extraterrestrial who got stranded on earth centuries ago) and a climax that pits an army of blank-eyed zombies advancing on the terrified passengers. Martin has also worked on giallos (Death at the Deep End of the Swimming Pool (1971) and horror films (It Happened at Nightmare Inn (1973) but Horror Express is probably his most popular effort among American fans.

When Horror Express first surfaced in the U.S. in 1972, it was virtually ignored by most critics and received only a short, mostly favorable review by Tim Lucas in Cinefantastique, the major fantasy film magazine of its day, which noted, “Despite the incredible nature of the film’s story, it is enjoyable simply on the basis of its fast-paced action scenes, which allow Lee to perform capably in a definitive heroic role, as the pompous yet courageous scientist Dr. Saxton, who always seems to be more intelligent than his script.”

The film has since grown in popularity with this assessment from Tom Becker of DVD Verdict a more typical response from the fanbase: “Imaginative, witty, and downright, honest-to-goodness scary, Horror Express is an exemplary early ’70s fright film. Director Eugenio Martin and writers Arnaud D’Usseau and Julian Zimet take what could have been a simplistic, run-of-the-mill shocker–beastie wreaking havoc on board a moving train–and transcend the formula by adding some clever, intelligent twists, clever subplots, and colorful characters. The story takes so many turns, it’s almost dizzying, yet everything makes sense in the context of the universe created by Martin, D’Usseau, and Zimet.”

0 122
The Greatest Event of The Year, The B Movie Celebration