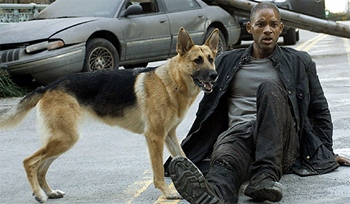 At the end of 2007’s mostly-aright I Am Legend, Will Smith blows himself up so that humanity may live to see another day. Killing your hero would be the end for most franchises. But because this is Hollywood, and because Legend grossed the type of money that buys Porsches for everyone at the studio (including the valets!), a sequel is officially underway: Deadline reports that Warner Bros has closed a deal with writer/producer Akiva Goldsman to produce a second installment, with the intention that Smith will return to reprise his role. They say it’s not a prequel, but obviously, with Smith dead at the end of the first film, some narrative trickery will be required.

There is, of course, no sequel to the original novel by Richard Matheson, which leaves the producers free to do pretty much whatever they want. My guess: This will form some sort of concurrent narrative with the first movie, with other humans spread out across the country trying to live in this mad, mad world. That will allow Smith will show up in some way… but, jeez, they pretty much told his entire story in the first one, and if this definitely won’t be a prequel… Yeah, whatever, figuring this out without any greater context is a permanent thought ellipsis. Stay tuned for more details.