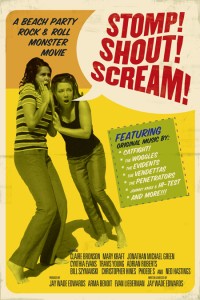 The ’60s “beach party” craze briefly blended with monster movie mores in vintage classics like Horror of Party Beach (1963), The Beach Girls and the Monster (1965), and The Ghost in the Invisible Bikini (1966). Now there’s a 21st Century beach monster movie that looks, sounds and feels a lot like its predecessors from the previous millennium: STOMP! SHOUT! SCREAM! is writer/director/editor Jay Wade Edwards perfectly realized reproduction of a drive-in movie from that era, replete with original garage rock soundtrack, gorgeous cinematography shot in pulsating ’60s colors worthy of Herschell Gordon Lewis, and too-cute-to-be-true animated opening and closing titles sequences featuring figures created by renowned retro-artist Derek Yaniger. The film is even set in 1966, and with all the attention to detail, including wardrobe, cars, hair styles, and even the earnest dialogue, you don’t doubt it for a minute.

The plot centers around the itinerent girl band The Violas (dubbed by real grrrl rock group Catfight!) played with sweet sincerity by Claire Bronson, Mary Kraft and Cynthia Evans. Allegedly from New York, they seem like native Georgians to me (the flick was shot on location in Atlanta and Florida, to ambient effect). Jonathan Michael Green plays a handsome young scientist who seems to channel fellow Georgia boy and genre icon John Ashley. Travis Young is a hunky garage mechanic who falls for one of the gals. The entire cast takes the silly proceedings seriously, but not to the point of overdoing it. This is not a self-conscious satire like Psycho Beach Party or even the Frankie/Annette reunion Back to the Beach. As in the original beach party movies, the camp comes naturally, which makes this effort seem all the more authentic. The soundtrack (reviewed on this site, under Music) is likewise a lovingly recreated party platter of surf/garage rock tunes that effectively evoke the era without dating itself. The “monster” itself, referred to as a “Skunk Ape,” is ridiculously unscary but this only adds to the overall appeal, and makes the production even more reminiscent of period exploitation flicks like The Monster of Camp Sunshine. Surf’s up: this is one beach party you want to crash. Street date: April 10, 2009 from Monogram Releasing. 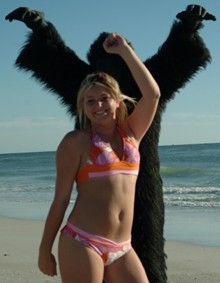