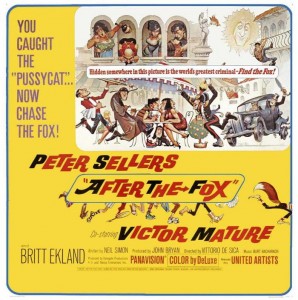 Peter Sellers is a real enigma. During his career, he made many brilliant films with amazing characterizations (such as DR. STRANGELOVE, BEING THERE, THE MOUSE THAT ROARED and many others), but he also did a lot of amazingly limp films that he practically slept through (THE FIENDISH PLOT OF FU MANCHU and THE PRISONER OF ZENDA). AFTER THE FOX is unusual in that it isn’t exactly brilliant but still is very good. As far as Sellers’ performance goes, he did a lovely Italian accent and his character was pretty credible, though despite being the star of the film, he wasn’t the standout performer (I think this was actually Victor Mature–doing a wonderful self-parody).

The Fox is a master criminal who escapes from prison rather easily in order to keep his sister out of trouble. At first, he thinks she’s become a prostitute, but later he finds she’s become (horrors) and actress!! Interestingly enough, his sister is played by Sellers’ real-life wife, Britt Ekland and his love interest in the film was played by an unknown (but beautiful) Italian. Once out of prison, he learns about a big caper from Akim Tamiroff–smuggling in millions of dollars worth of gold into Italy. So, inspired by his sister’s desire to be a movie star, he decides to make a fake film and use this as the cover to smuggle in the gold–and this is how Victor Mature comes into the film. He plays a parody of himself but is very vain and over the hill–telling everyone he’s in his thirties even though he’s pushing 60! I loved how he insisted he was so young when it was so obvious he wasn’t–especially in the scene where Britt throws herself at him and runs her fingers through his hair–only to have them stained black by hair dye. Plus, he was so full of himself that he was gullible enough to believe he was making an art film when in fact Sellers and his gang obviously had no idea what they were doing.

By the way, how Sellers got all the film equipment was pretty interesting. As the film was directed by Vittorio DeSica, he himself appeared in a small scene. He and his crew were filming some Egyptian epic when suddenly the wind machines turned on at full blast. When they were finally turned off, all the equipment–even DeSica’s platform and cameras–were missing–stolen by Sellers’ gang.

Throughout the film there were many cute moments, but also towards the end the film did lag a bit and the ending seemed to be a bit of a letdown. I especially became bored with the chase scene and the ensuing courtroom scene. Still, it was original and moderately funny with some excellent performances.