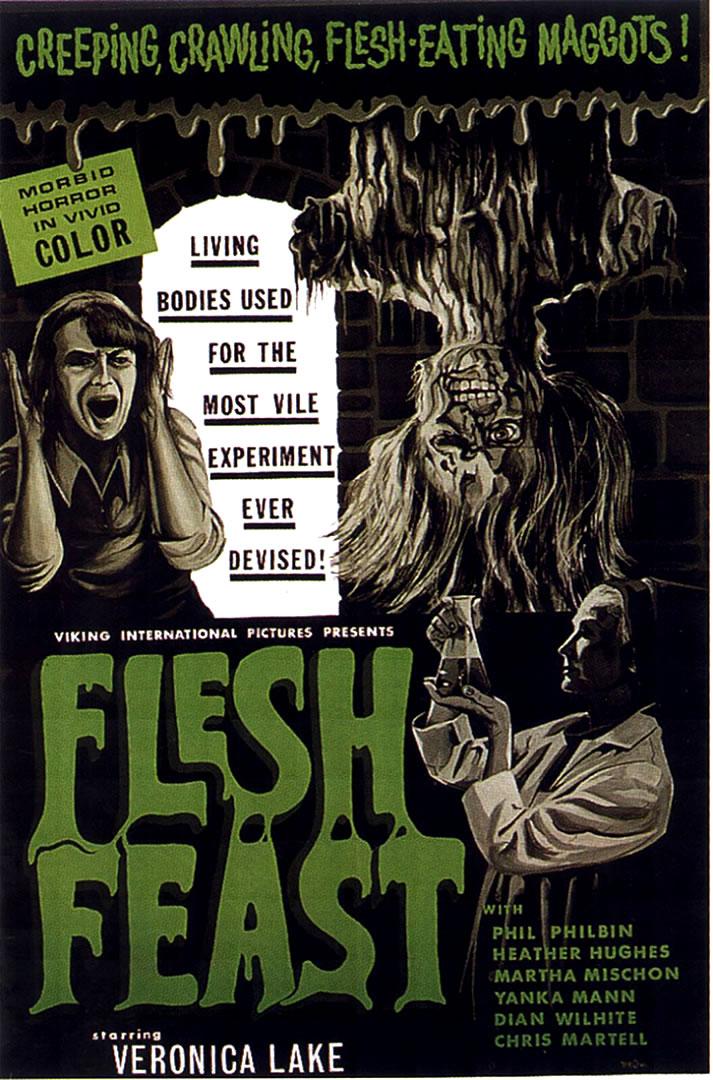 Producer, Director and Film Teacher Brad Grinter was well liked in the Florida Exploitation film community, if only for the fact that as Grinter was a fully fledged nudist, naked women always seemed to be hanging around his office. His films though are a less titillating prospect. Their shoddy editing and out of focus shots pose the question what on earth Grinter was teaching to his film students, who are thought to have unwittingly financed many of Grinter’s directing outings by paying hefty tuition fees. According to legend Grinter met Veronica Lake in the late Sixties when he was working as a location scout on Herschell Lewis’ ‘Just for the Hell of It’. That film, a story of anti-social youths on a rampage, called for a room to be trashed at one point. After contacting a local landlord, such a room was hired for destruction- the only problem being an elderly woman had secretly moved in and was about to be evicted. Grinter intervened, allowing the woman to remain in the room during filming, and later discovered his ‘tenant’ was non other than the former ‘I Married a Witch’ and ‘Sullivan’s Travels’ star who’d evidently fallen on hard times. A sad story, but perhaps not as sad as Flesh Feast, the Sunshine State horror movie that Lake financed as a ‘comeback’ vehicle and Grinter co-produced and directed in 1970.

The convoluted plot opens with the murder of a newshound investigating arms dealer Carl Shuman. Upon learning of his friend’s death publisher Ed Casey vows ‘I’m going on this case myself’, but by the time the credits have rolled he’s obviously had a change of heart since he spends the rest of the film sitting behind his desk. The film then switches to the Miami mansion of Shuman’s friend Elaine Frederick (Lake) a doctor and former mental patient (not the greatest of combinations) who has been working on creating a ‘modern day fountain of youth’. Grinter’s favourite non-actress Heather Hughes plays Frederick’s nurse assistant, who is in fact secretly working undercover for Casey. Two other nurses also snoop around the mansion and say things like ‘gosh this should give you the willies’. Hughes gains Frederick’s trust to the degree that she’s allowed to help out with the doctor’s experiments which involve stealing bits of corpses ‘from the spare parts department’ of the local hospital and feeding human flesh to cannibalistic maggots. The script by Grinter and Thomas Casey (he of ‘Sometimes Aunt Martha Does Dreadful Things’ infamy) isn’t at all clear as to why, but Frederick believes the flesh munching maggots can act as a plastic surgery substitute and reverse the aging process. Halfway through the film a bunch of South American heavies show up at the mansion and effectively hold everyone hostage. They’ve been sent there by Frederick’s secret financer, ‘The Commander’, an aged dictator who plans to use the doctor’s discovery for his own nefarious ends. The Commander’s second-in-command the ‘very old and very arrogant’ Max Bauer played by a young actor in flour make-up turns up and acts as a guinea pig for Frederick’s maggot plastic surgery. The operation done presumably by applying maggots to Bauer’s face is a success, but Bauer lets the idea of looking young again go to his head and strangles one of the nurses, only to be then stabbed to death by her boyfriend. After what seems like an eternity ‘The Commander’ finally shows up, and as if the moustache and phoney German accent wasn’t a dead giveaway turns out to be non other than Adolf Hitler, alive and well and on the look out for a new face. However the Nazi’s plan goes belly up when the bodies of Bauer and the nurse are discovered resulting in a shootout between the police and the heavies. In the confusion Frederick straps Hitler down to an operating table, reveals her mother died in a concentration camp and as revenge tortures him to death with cannibalistic maggots.

While Flesh Feast’s storyline would suggest it to be, if nothing else, a worthy companion piece to Grinter’s Blood Freak (about a biker who due to drug experimentation turns into a turkey monster), sadly all of its plot absurdities are lamely realised, and without the…..dare I say charm of his turkey horror film. There’s no discernable action or suspense, and Grinter seems to have been under the delusion that a string of repetitive scenes featuring Florida exploitation perennials like Chris Martell and Harry Kerwin lounging around in motel look rooms and yakking in dodgy foreign accents would somehow pass for an entertaining film. Grinter occasionally waves the odd severed limb in the audience’s faces, and there are even several somewhat desperate stabs at black comedy with Frederick’s assistants smuggling a body from a hospital simply by putting dark glasses on the corpse and ‘conspicuously’ pushing it around in a wheel-chair or when nurse Heather Hughes feels so bad about one of her dead former patients having a leg cut off with a hacksaw that she remarks ‘poor Mrs. Lustig, I hope she doesn’t mind leaving her body to science’. Such minor rewards though are hard to recommend when the rest of the film is such tedious, yawn-a-minute stuff. Lake, because this was her final film before her death in 1973 lends the film a certain ‘footnote with an asterisk’ status, and is better than the cardboard supporting cast, but it’s hard to argue that being surrounded by maggots, a Hitler impersonator and the low end of the Florida entertainment world was a fitting finale to anyone’s career.

Brad Grinter passed away a few years back and the rights to his films were inherited by his son Randy who has recently sold them on for VHS/DVD releases. Blood Freak is already out and Grinter’s once presumed lost nudist films are rumoured to be coming shortly. The poor quality DVD release this review was based on however bares all the hallmarks of an unauthorized grey area job.