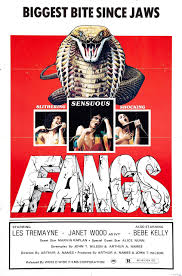 “Snakes” is a peculiar and – in fact – very wrong 70’s animal exploitation, but it’s undeniably great entertainment. The film introduces Snakey Bender (Les Tremayne), a snake shepherd who traditionally visits every Wednesday a little town that is … um … rather fond of snakes. On these glorious Wednesdays, all the kids from school pass by his ramshackle car to look at the snakes, Snakey gets invited to the kinky school teacher’s house for a bizarre sexual ritual with a big venomous cobra and – cherry on the cake – he has his weekly reunion with his pal the mayor to listen to old records and behave like idiots. You see, life’s just fabulous when you’re name is Snakey Bender. But then a series of unfortunate events occur and Snakey’s status suddenly goes from being a popular town guest to being a despicable outcast. Under the influence of a deranged storekeeper and the local priest (who keeps exclaiming that all serpents are the devil’s minions) everybody betrays Snakey and treats him like filth. He’s not even welcome at the mayor’s residence anymore, because that fat bastard married a sexually dominant wench overnight. It’s a very stupid idea to upset a snake nut, obviously, as the deeply frustrated Snakey calls upon his slithery friends to extract some good old revenge. As you can tell, “Snakes” is a totally bonkers flick that never at one point makes any sense. I mean, it’s an old dude going dangerously berserk simply because he isn’t welcome anymore in a village that he only visits once per week? He turns into a cold-blooded killer (although he doesn’t commit the vile acts himself) from one moment onto the other because they messed up his precious Wednesday routine! Awesome. Only in the 70’s this sort of stuff could be produced. The premise of “Snakes” is vaguely similar to that of “Willard” (with rats) and “Stanley” (also snakes), but here there’s less affection with the animal species in question. They all remain nameless as Snakey himself demands to stand in the spotlights. Purely talking in technical terms, “Snakes” isn’t exactly a sophisticated effort neither. You can tell right from the bombastic opening sequences, with loud and immensely annoying marching band music that cheerfully keeps playing long after the opening credits are finished. There’s very little gore, probably due to budgetary restrictions and the acting performances are (intentionally?) abominable. “Snakes” is exclusively recommended to exploitation/drive-in fanatics with a wicked sense of humor.