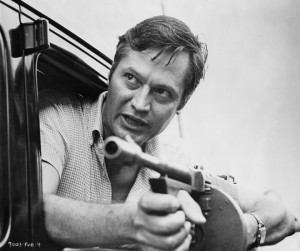 Roger William Corman (born April 5, 1926) is an American independent film producer, director, and actor. He has been called “The Pope of Pop Cinema”, and is known as a trailblazer in the world of independent film. Much of Corman’s work has an established critical reputation, such as his cycle of low budget cult films adapted from the tales of Edgar Allan Poe. Admired by members of the French New Wave and Cahiers du cinéma, in 1964 Corman was the youngest filmmaker to have a retrospective at the Cinémathèque Française, as well as the British Film Institute and the Museum of Modern Art. In 2009, he was awarded anHonorary Academy Award.

Corman mentored and gave a start to many young film directors such as Francis Ford Coppola, Ron Howard, Martin Scorsese and James Cameron. He also helped to launch the careers of actors Peter Fonda and Jack Nicholson.

Corman has occasionally taken minor acting roles in the films of directors who started with him, including The Silence of the Lambs,The Godfather Part II, Apollo 13, The Manchurian Candidate and Philadelphia.