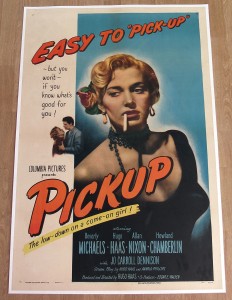 Citizen Kane it ain’t, but Pickup isn’t nearly as bad as one might think. Actor-director Hugo Haas deserves better, and I hope I can help the poor man (long departed) out. Haas,–no, I won’t go into his career and background–let’s just say the man had the reputation for being an okay actor, but as a director he was considered a sort of Central European version of Ed Wood. Pickup is about an older man, played by Haas, whose life is made a wreck of and nearly ruined by a toothy, gum-checking but withal irresistible blonde, portrayed by the unforgettable Beverly Michaels. The girl is, to be as genteel as possible, a worthless tramp, and nasty and stupid in the bargain. She plays with her adoring and naive lover like a cat with a mouse, and has an affair with a much younger man on the side. Amazingly, no one is murdered in the course of this film, which is actually at times quite sweet. Look, every novelist cannot write The Brothers Karamazov and every composer cannot write the Eroica, so why put down poor Mr. Haas whose only sin as an artist that I can tell is that is that he isn’t Orson Welles. The man had a heart and soul, and this comes through in many scenes. He understands cruelty, too, and the woman in this film is, for all the melodrama, a not innacurate portrait of a certain kind of low-down broad who, if one were to show her videotapes of her inflicting her standard dose of pain on whoever the poor dope fool enough to get involved with her at the moment is, would shrug, light a cigarette and say, “Well, he was asking for it, wasn’t he?”. I’m not too sure about the character Mr. Haas plays in this film, but there is a kernel of truth in the mean little tale he tells; tacky though it may be, there’s life in it nonetheless, which is good enough for me.