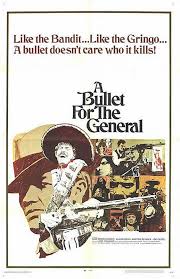 The movie centers on a Yankee (Lou Castel) who joins forces with an outlaw band (leader is Chuncho well played by Gian Mª Volonte and his hoodlum performed by Klaus Kinski) during the Mexican revolutionary war by time of the President of Mexico Velustiano Carranza following the overthrow of the dictatorial Victoriano Huerta regime in the summer of 1914 . The gang allows him to join them to sell weapons to Mexican revolutionaries ignoring he is double-crossing , as he is a traitor working for dark forces .

It’s a magnificent western film with dazzling shootouts between the protagonists and the contenders . The spotlights of the movie result to be the confrontation in the train and the final duel . There is a special remembrance to Leone’s western , because appearing : Volonte , Kinski and Aldo Sambrell who are usually in the master’s Spaghetti films . This picture belongs to numerous group in which is set during Mexican revolution , called ¨Zapata Western¨ , such as the Italian films : ¨Compañeros¨ , ¨The mercenary¨ , ¨Tetepa¨ and the American movies : ¨The wild bunch¨ and ¨The professionals¨ . The picture blends violence , blood, action western and it’s fast movement and for that reason is entertaining ; besides there is a thoughtful dialog with a clever writing in leftist trending by Franco Solinas , screenwriter of a notorious film ¨The battle of Algiers¨ . Enjoyable musical score by Luis Enrique Bacalov , author of ¨The Postino and Pablo Neruda¨ which won an Oscar for the soundtrack and he composed lots of Spaghetti Western scores .

The motion picture was rightly directed by Damiano Damiani . Damiani’s nice direction is well crafted , here he’s mostly cynical and inclined toward violence and too much action especially on its ending part . Damiano is an expert on all kind of genres as Drama such as ¨Arthur’s island¨ , ¨The Most Beautiful Wife” , ¨The witch¨ , ¨Empty canvas¨ based on the Alberto Moravia novel ; Terror as ¨Amytiville 2 : the possession¨ and Historical as ¨The Inquiry¨ . Damiani was specialized on crime-thriller-Subgenre or Italian cop thriller as ¨Confessions of a Police captain¨ , ¨How to kill a judge¨ and ¨The case is closed , forget it¨, and Spaghetti Western as ¨Trinity is back again¨ with Terence Hill and this prestigious ¨A bullet for the General¨ . Rating : Good . Well worth seeing .