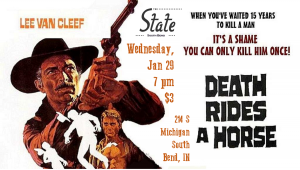 When Bill (John Phillip Law) was a young child he witnesses a gang kill his father, and rape and kill his mother and sister, while he was spared. Now Bill is a young man who is now intent on exacting revenge on those who were responsible for killing his family. He also meets a gunslinger/ex-con Ryan (Lee Van Cleef) who has just been released from jail and who’s out to even the score with those exact outlaws, which betrayed him. So, now the two, tussle with each other to see who’ll get to them first, but with the time they spend with each other, Bill also learns some valuable tips from Ryan.

As a kid growing up I loved my Westerns, but they had to be Cowboys and Indians, if there were no Indians, I just didn’t give a damn. But how have times changed. I have just started to get back into the genre (and no, I don’t care if there ain’t no Indians), and lately the spaghetti western sub-genre. I’m a big fan of Sergio Leone’ s Dollar films, which people say are the catalyst for spaghetti westerns. I didn’t know anything of this film and probably wouldn’t have paid much attention to it, but since I read some positive comments about it on a thread (in the horror board, of all places), I thought it would definitely be worth a look. But, I didn’t have to go out of my way to find it, as it pop up on TV a week or two later. Anyhow, I’ve babbled enough about my personal experience, back to the film.

What gripping stuff! It surly was better, than I expected. A lively spaghetti western that had plenty of surprises along the way and it just wasn’t a shoot-’em-up story with plenty of violence, but the cleverly laid out plot, builds on the revenge tale with some mystery and panache and kept the violence within the story’s limits. Everything comes together rather perfectly with such a dark and macabre opening to its fitting finale. The story did kind of reminded me off Leone’s “For A Few Dollars More”, which Luciano Vincenzoni who penned this film, was also co-writer in the last two Dollar films. As for the script, there is lot spite, wit, but also it was rather standard and stiff dialogue. There probably could’ve been a bit more flair, especially from American actor John Phillip Law who was basically dead as wood in delivery and probably the film’s weakest point. But the same can’t be said of legendary actor Lee Van Cleef’s performance. He brought a hard-boiled character that also added some dry humour and sizzling skills that ideally fitted in the overall tone. Combination between Cleef and Law goes down quite well and adds another dimension into the film (father and son figure). The rest (especially, the villains) gave your usual mean performances. Though, throughout the film, those Mexican outlaws seem to find the funny side of things, out of really nothing. I just find it rather amusing, especially because of the irony of it all. Ennio Morricone (also from the Dollar films) came up with a standout music score, which mixed some soothing Mexican music with an uplifting and rousing western score. The camera-work isn’t that potent, but it still gets some flashy treatment. With its sharp and encroaching shots. It also captured the vastly desolated landscape that sprawls on the screen. Direction by Giulio Petroni keeps the film grounded and keeps a rather brisk pace. He creates some well-designed shootouts and sequences. One being the eerie opening and another an explosive showdown amongst an empty town during a dust storm. By the way, it’s a great title isn’t it?