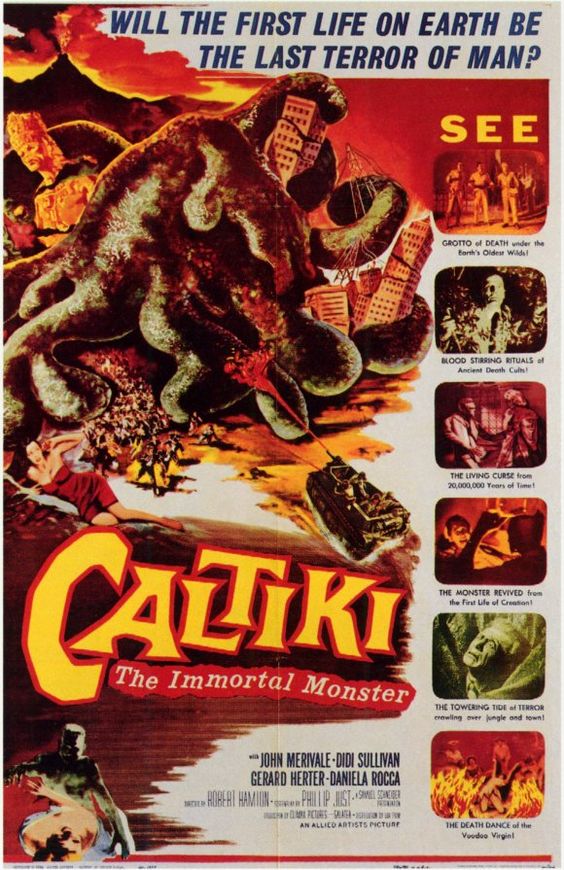 Ours is a sick culture. Either that, or a strangely apologetic one. Because if there is any genre that is sure to garner praise without any reservation; it’s a Holocaust flick. You want an Oscar? Make one. You don’t like it? You must be an anti-Semite, cry the critics. Bizarre, America had no role in the Holocaust so why feel guilty? And with a few exceptions, most of those films are mediocre at best, exploitative trash at worst. Clearly, there is only one way to remedy this sickness that has held Hollywood in it’s vice like grip:

It’s true. That is the one sub-genre that can do no wrong. Think I’m joking? Look at all the great blob films of decades past, from THE film which led to Hammer’s first big hit; ‘The Quatermass Xperiment’ and it’s sequel, to the studio’s own talky but engaging ‘X, the Unknown’, Steve McQueen’s acting debut Tour de Force; 1958’s ‘The Blob’, it’s charmingly awful sequel, it’s amazingly superior remake(And I hate remakes with a passion), that awesome segment in ‘Creepshow 2’, Japan’s ‘Dogora’ and ‘Yog: Monster from Space’ all are great. Not a truly bad or unwatchable film in the lot. So why not make more entries in this unbeatable sub-genre? Clearly, Hollywood has no guts to explore the boundaries of cinema that these films could expand. They just want to make safe and marketable holocaust flicks. Shame.

BUT! As good as those films mentioned are, no discussion of these drippingly good classics or classics dripping with goodness is complete without mentioning the 1959 masterpiece ‘Caltiki’. Directing was begun by Riccardo Freda, with much of the film completed by Mario Bava(I wonder if he moved on to anything good?*sarcasm*)and it’s a gem.

Legend says that Mayan Goddess Caltiki will return when fire is seen in the sky, and wouldn’t you know it? A meteor passes through! While exploring Mayan ruins, explorers made up of bickering couples(One is a square-jawed white man with a white wife, the other couple is a sniveling, accented man named Max with an interracial girlfriend who he abuses, jeeze, who do you think is going to be the couple that survives?)stumble upon a cave with a lake inside, best of all, it has jewels at the bottom! Max decides to take the jewels, but fails to notice the tar like substance that is at the bottom of the lake that is rising……

You can guess what happens next, it’s all a lot of fun. From a plot development involving a maimed Max doing an imitation of Richard Wordsworth in ‘The Quatermass Xperiment’ for no real reason other than to provide a human villain, to a memorable sequence where the protagonist is jailed while his family is in danger, to a surprisingly deep performance from Daniela Rocca as Max’s submissive girlfriend, to a surprisingly clever psuedoscientific explanation for Caltiki, to several scenes that must have been appallingly graphic for the era, it’s all a hoot. You’ll keep your feet off the floor in the dark for weeks.

It starts off slow and the dialogue is silly, but it’s more entertaining than the majority of ‘A’ movies now!!! See it, or have your arm burned off by Caltiki! It’s the ‘Citizen Kane’….of Blob movies.