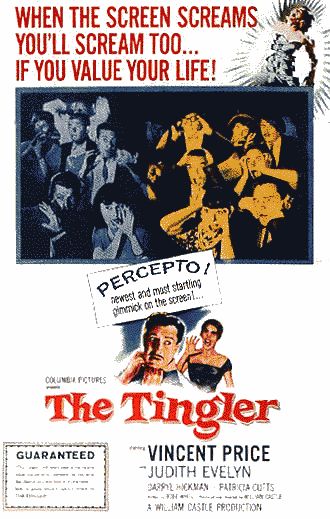 The Tingler marks the second teaming for horror’s greatest actor – Vincent Price, and horror’s greatest showman – William Castle. This film was released later in the same year that their first venture – House on Haunted Hill – was unleashed upon audiences across the world, and the film sees the two men deliver more of what they did with their first feature. House on Haunted Hill was much loved then – and now – for it’s ludicrous plot line and hammy performances, and The Tingler marks another successful fusion of these elements. The plot line is even sillier this time round, and it follows Vincent Price’s scientist as he conducts his experiments into fear. He discovers that when we get frightened, a thing, which he called ‘the tingler’, manifests itself on the spinal column and the only way to rid oneself of this ‘tingler’ is to scream. Deaf mute’s cant scream, however, and soon after discovering that his friend’s wife suffers from that condition, and has an acute fear of blood, Price gets to work on attempting to isolate and remove the tingler.

William Castle shows his flair and passion for entertaining his audience throughout this film, with the whole film being, basically, a metaphor for the horror genre on the whole. Castle uses several different methods of getting his audience to scream, and while this film isn’t very scary by today’s standards – watching this master of entertainment weave his magic is always delightful. Another thing that’s delightful about this film is the fact that Vincent Price is in it. Price has an amazing ability to command to the screen, and while this movie doesn’t feature his best performance – he’s always entertaining, and it’s always a pleasure to see him on screen. Castle’s special effects are hokey, with the central monster – the tingler – looking rather silly, but that adds to the fun effect of the movie and if the effects had been terrific examples of how good special effects can be – the film wouldn’t have been nearly as fun as it is. The Tingler is silly throughout, and it gets really ridiculous towards the end, but if you watch knowing that this isn’t to be taken seriously, you’ll enjoy yourself just like Castle intended.