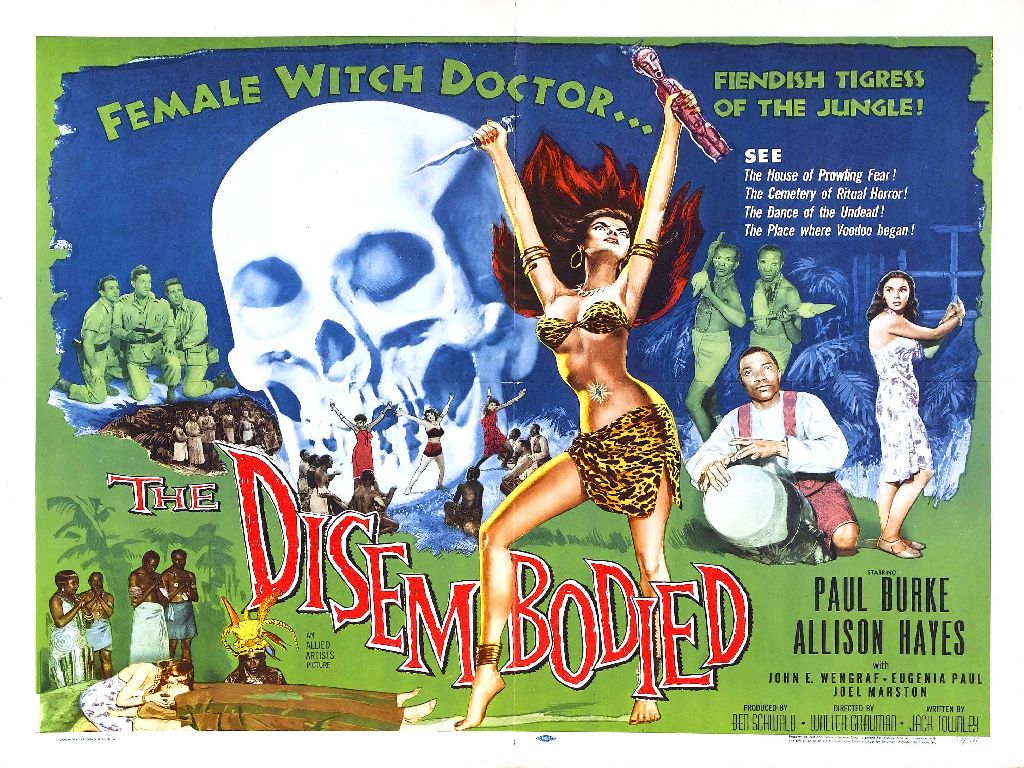 Allison Hayes plays Tonda Metz, a beautiful woman living in the jungle with her much older husband (John Wengraf) who just happens to be a doctor. A group of men are making a movie in the jungles when one is attacked by a lion so they take him to the doctor and soon the wife tries to get her hooks into Tom (Paul Burke) but he feels something is wrong and he’s correct because the lady is a voodoo princess. THE DISEMBODIED has a pretty bad reputation and after viewing the film it’s easy to see why so many people want to forget this turkey because it really is as bad as everyone says it is. The film runs just 66-minutes but that’s about an hour too long and for the life of me I can’t figure out why the wife went through all the trouble she does when she could have accomplished her goal with very little effort. I won’t spoil what she’s doing but once you figure it out you’ll really want to talk to the screen and explain to her that she’s wasting her time as well as our time. The screenplay never seems to realize what it wants to do or perhaps Allied Artist simply ran out of money and demanded certain scenes to be removed or shot for cheap. I’m not sure which it was but the screenplay pretty much has characters sitting or standing around talking about what they’re going to do and it’s just downright boring. There’s even a scene where one man threatens to shoot another and he’s going to give him a ten-count and then we have to sit there the entire time while he counts this down. The film’s one saving grace is that we do get a couple nice performances. I thought Burke was fairly good in his role and at least gave the film a little boost in terms of entertainment. I also enjoyed Wengraf, although it’s never really explained what he’s doing in the jungle and how he got such a young wife to go out there with him. Hayes will always be remembered for ATTACK OF THE 50FT WOMAN but she’s pretty good here as well. I thought she manages to play the femme fatale quite well as she was certainly believable in the part and I felt she really was “strong” enough to control these men with her powers. However, even these nice performances can’t save the film and make it worth viewing. There were several voodoo films released in this era and the majority of them were pretty bad and this one here might be the worst.