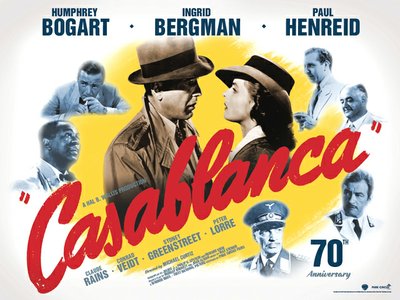 How will you celebrate the 70th anniversary of Casablanca?

You can see the cherished classic in a special presentation at movie theaters. You can buy a fresh edition to savor at home. And just for the heck of it, you can test your knowledge with the trivia quiz that’s farther down on this page.

For the millions of us who love it, Casablanca is a film we return to again and again. We’re gripped by the romance between Rick Blaine (Humphrey Bogart) and Ilsa Lund (Ingrid Bergman) as well as by the sub-plots involving such superb supporting actors as Claude Rains, Peter Lorre, Conrad Veidt, Paul Henreid, and Sydney Greenstreet.

It was on the big screen that the war-time tale of love, danger, friendship, and sacrifice first thrilled viewers at the premiere on November 26, 1942. So it’s only right that this Wednesday (March 21) at 7 p.m., Turner Classic Movies Presents Casablanca 70th Anniversary Event occurs in approximately 500 theaters, including some in San Diego.

Just as the Metropolitan Opera and other cultural organizations are flexing their box office muscle at ‘plexes, Turner Classic Movies, Warner Bros, and NCM Fathom have teamed for these screenings. In addition to the film, there will be behind-the-scenes clips and interviews, hosted by TCM’s trusty movie expert, Robert Osborne.

Check out ticket information and a list of participating theaters by clicking here. And keep in mind that on March 27, Warner Home Video releases the 70th anniversary edition on DVD and Blu-Ray. (The gift set even includes a set of drink coasters.)

Think you know a lot about Casablanca? See if you can ace my trivia quiz. If you answer at least 10 of the 15 questions correctly, you deserve a reserved table at Rick’s café.

1. Fill in the blank. Humphrey Bogart utters one of the most famous lines in the movie when he says to Ingrid Bergman: “We’ll always have __.” A. Casablanca B. Paris C. National City

2. How did Casablanca rank in the American Film Institute’s list of the 100 greatest love stories of all time? A. First B. Second C. Third

3. Rick’s Café Americain was inspired by a nightspot in which city? A. Tangiers B. Tijuana C. Toluca Lake

Dooley Wilson sang memorably but he wasn’t a pianist.

4. As Sam, one of the club musicians, Dooley Wilson only pretended to play the piano. Which instrument could he really play? A. Double bass B. Drums C. Accordion

5. Which of the following actors were major stars in Germany before appearing in Casablanca? A. Conrad Veidt B. Peter Lorre C. S.Z. (“Cuddles”) Sakall

6. Fill in the blank. A key plot point involves Letters of __. A. Transport B. Transit C. The alphabet

7. Which of the following subjects got Casablanca into trouble with Hollywood’s Production Code? A. Drugs B. Sex C. Smoking

8. The film includes shots of an actual airport in which of the following cities? A. Santa Monica B. Borrego Springs C. Van Nuys

9. Ingrid Bergman was how many inches taller than Humphrey Bogart? A. 4 inches B. 2 inches C. Neither. She was shorter.

10. Refugees in Casablanca are desperate to get to which city?
A. Lisbon B. Paris C. San Diego

11. The national anthem of which country is played during an emotional scene in the film? A. France B. Germany C. Albania

12. Which publication ran a lukewarm review of Casablanca that called it “pretty tolerable”? A. The New York Times B. The New Yorker C. The San Diego Reader

13. Name the cartoon character that starred in a parody of the film. A. Yosemite Sam B. Bugs Bunny C. Goofy

14. Name the university that has the longest tradition of screening Casablanca during final exams. A. San Diego State University B. University of Southern California C. Harvard

15. How many Academy Awards did Casablanca win? A. Three B. Two C. None. The big winner was They Stooge to Conga starring The Three Stooges.