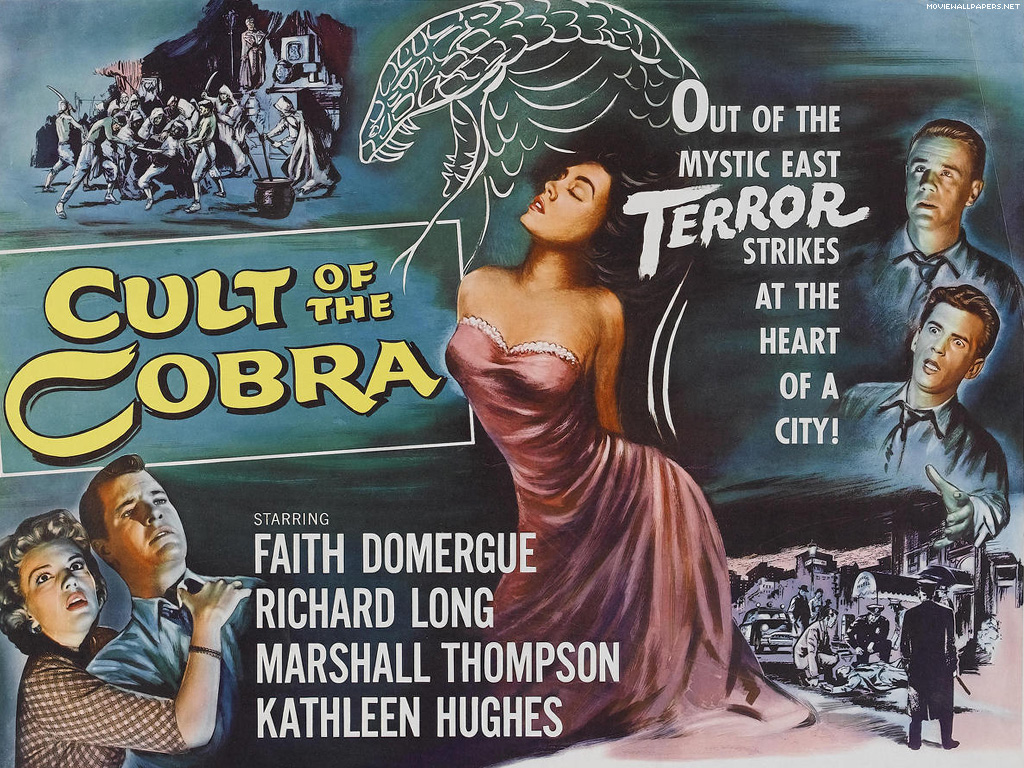 GIs in 1945 Asia are introduced to the actual ceremony of a “female human cobra”(essentially a woman in costume who is slithery like a snake)by a native snake charmer who warns them to keep quiet inside their hooded robes, but Nick of the group stupidly attempts to take a snapshot resulting in the American soldiers being cursed. This curse entails that all the GIs will be hunted down one at a time by the cobra woman, to be victims of her poisonous bite. Returning home absent Nick(who is “reinfected” when a snake enters his room in a hospital, the bite killing him)to New York, the GIs, now civilians, aren’t out of harm’s way. Tom(Marshall Thompson; IT! TERROR FROM BEYOND SPACE/ FIEND WITHOUT A FACE)and Paul(Richard Long; THE HOUSE ON HAUNTED HILL/THE TWILIGHT ZONE) are both in love with a girl(Paul is chosen over Tom, though)which doesn’t end their friendship(the guys are roommates). A new tenant moves in across from Tom and Paul, an exotic foreigner named Lisa(Faith Domergue). Tom develops feelings for her right away, but Lisa immediately gives him the cold shoulder any time he attempts to snatch a kiss. There’s a reason why Lisa wants to distance herself from Tom romantically, but soon her feelings for him become too difficult to ignore. Something will, however, drive a wedge between their blossoming love affair and that is what Lisa is plagued with.

While this is a Universal Studios picture, to me it favored something more like a Columbia Pictures product. The filmmakers decide to avoid showing an actual human cobra, opting instead to show Faith Domergue’s silhouette on the wall metamorphose into a cobra(there’s an ending where we see the actual cobra turn back into a human through dissolve which is flawed because it’s highly doubtful that a naked snake would transform into a woman with all of her jewelry and wardrobe on). Most of the attacks on the GIs are shot from point-of-view through the eye vision of the cobra as the victims respond with fright at what is coming towards them. This movie does resemble CAT PEOPLE in that Tom falls in love with a beautiful woman he can not attain due to her terrible predicament. The filmmakers establish Lisa’s situation in subtle ways like how animals react towards her, such as Tom’s dog or a horse on the street. When stage actress Julia(the lovely Kathleen Hughes)begins reading on snake cults and customary practices, like in CAT PEOPLE when Simone Simon’s Irena becomes a deadly threat to her husband’s best friend(and future lover), Alice(Jane Randolph), Domergue’s Lisa follows a similar mold, taking cobra form at the end, awaiting her in the dressing room. Domergue is a striking beauty, dressed to the nines in sophisticated wardrobe. For some reason, CULT OF THE COBRA never quite takes off but it might appeal to fans of Val Lewton and the “less is more” approach, focused more on the soap opera dramatics of Tom and Lisa’s relationship and what they are up against..I imagine that had it been made 10 years previous, CULT OF THE COBRA might’ve been more of a creature feature with Domergue an actual cobra woman.