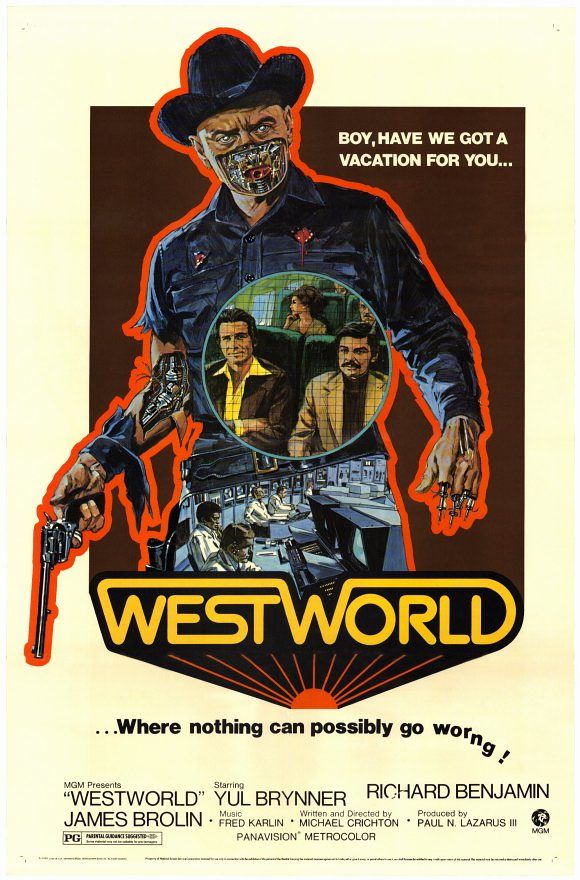 “Westworld” is supposed to be set in the future (as visualized back in 1973 when the film was made, apparently the computers of the future are really, really big, and the monitors are really, really small, lol), where pampered rich folk can go to a vacation resort named “Delos”, where they choose one of three “worlds” to visit and interact in: Medieval World, Roman World, and Westworld. Our protagonists John Blaine and Peter Martin (played by James Brolin and Richard Benjamin, respectively) choose Westworld. John is a Westworld veteran, having visited many times. Peter is his friend and first-timer at the resort; uttering childlike statements such as “Do we get a real gun? Wow!” In the various “worlds”, the guests interact with each other and with anatomically-correct, extremely realistic robots. They are able to *ahem* interact very closely with the female robots, and also shoot the mean robots for fun (the guns they are supplied with will not work on real people) as they wish. A real “cowboys and indians” scenario for the child in us all. Roman World is promoted as a big sex resort, and Medieval World is geared towards the romantic, it seems.

The film starts out with quite a lot of intentional comedy and satire, and frankly starts out very much like it could have been a 1970’s TV “Movie of the Week”, but once the robots start to go bad…what we have for the rest of the film is a truly creepy western/sci-fi film. It’s a gunfight! Albeit a Sci-Fi one. The last half-hour of the film is essentially a silent movie, as Crichton said he wanted, save for the great soundtrack, which sounds something like a bow being drawn against piano strings, or a cello; anyway it has the same unsettling effect as the out-of-tune piano in another classic, “Wait Until Dark” (1967).

But “Westworld” was the first scary robot film I ever saw. And even after the others that followed, nothing quite equals Yul Brynner in his role as the gunslinger robot gone bad in “Westworld.” His performance is what really makes the movie. Brynner was a good actor, and even (aybe especially) playing a machine, his skill is used to great effect. His performance was anything but wooden (unlike the always wooden Ah-nold in “The Terminator”, for instance).

When Brynner’s robot gunslinger commands “Draw”, with the slightest twist at the corner of his mouth, he is completely creepy and scary. Even the way he walks when hunting down Richard Benjamin’s character has an element to it that I have never seen again.

What’s also great about this film is the development of Benjamin’s character of Peter Martin. He starts out as the inexperienced nerdy sidekick to Brolin’s John Blaine, and ends up showing his true mettle as the going gets rough. The nerdy naive Martin quickly learns how to survive.

This was Sci-Fi writer/director Michael Crichton’s first foray into big-screen film-making. Crichton has said he made the film in thirty days. I would expect that finding pre-made sets were easy at least; there was bound to be at least a western set sitting around the studio lots. And of course, back then there were fewer and less complicated special effects.