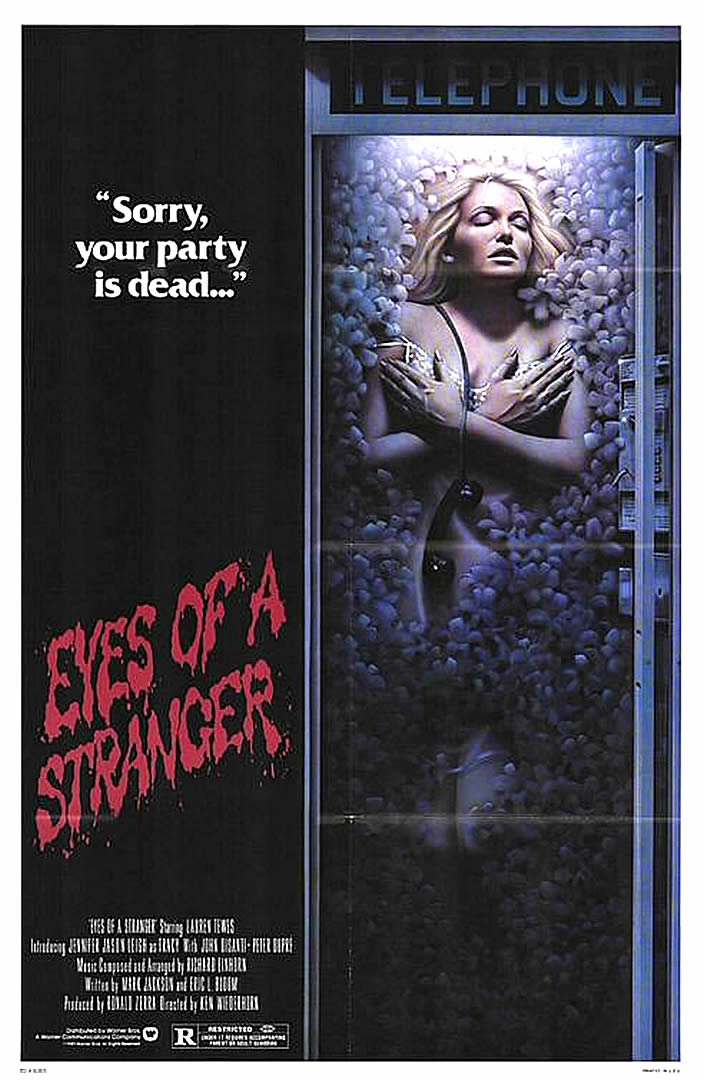 A series of gruesome sex murders is plaguing a coastal community of Miami and the police seem to be well behind the eight ball. Jane, a local TV news reader urges viewers each time a murder happens to ring up with any sort of information to catch this killer. This really strikes a nerve with her, as her blind and deaf sister Tracy who she lives with was raped and left for dead when she was a child. Causing this traumatic condition. After some unusual coincidences, Jane starts to suspect her neighbour Stanley Herbert might be behind the murders.

After making the sorely underrated 70s horror gem “Shock Waves” (which appears in the film in a couple of shots focusing on a TV), director Ken Wiederhorn returns back to the genre with an low-budget Hitchcock inspired thriller, which to fit the trend of the times it also threw in many 80s slasher traits. While derivatively clichéd and filled with some implausible scenarios, it’s still well made and actually can be creepy, suspenseful and at times a clever exercise in familiarity. The voyeuristic plot, yep it’s got one. Rings true to “Rear Window (1954)” and even “Wait Until Dark (1967)”. The killer’s identity is brought up quite early, so there’s no surprise there and through flashbacks we actually see what happened to Tracy. Which goes a long way to show how hard it hit Jane and the guilt that plagues her with her involvement in getting this predator. The characters here are capable of looking after themselves and have good judgement of common sense.

After a strong opening half and being realistically staged in parts, it then it falls away gradually and becomes the run-of-the-mill stalk and slash vehicle that simply leaves you waiting for it cracking conclusion. What little substance it generates is broken up by the ridiculously nonthreatening phone calls taunting his victims and its random acts of unpleasant violence. Make-up artist Tom Savini is the master behind the death-sequences and crafts some good effects. While, one or two moments stand out, sadly most of the scenes were off camera or were cut out. The suspenseful situation really does lose out to the basic slasher set-ups and seedy intentions of its material. Wiederhorn’s tight direction is sturdily achieved and he doesn’t go at a cracking pace. The grimly washed-out look of the film enhances the eerily sordid atmosphere. The moody lighting, Richard Einhorn and Red Neinkirchen’s ominously alarming electronic music score and leering camera-work by Mini Rojas simply soaked up the encroaching menace of a city plagued by a vicious killer. The cast provide spot-on performances. An effectively worthy Lauren Tewes (Love Boat fame) gives it her all as the gusty TV news reader Jane and the delightfully stunning Jennifer Jason Leigh in her first major screen role plays it accordingly assured as the blind/death Tracy. Looking the part, John DiSanti’s lumbering physic and unnerving attitude is rather convincing as the murderer.

It’s nothing out of the ordinary and it can get contrived, but it’s well-made and provides potently active lead performances.