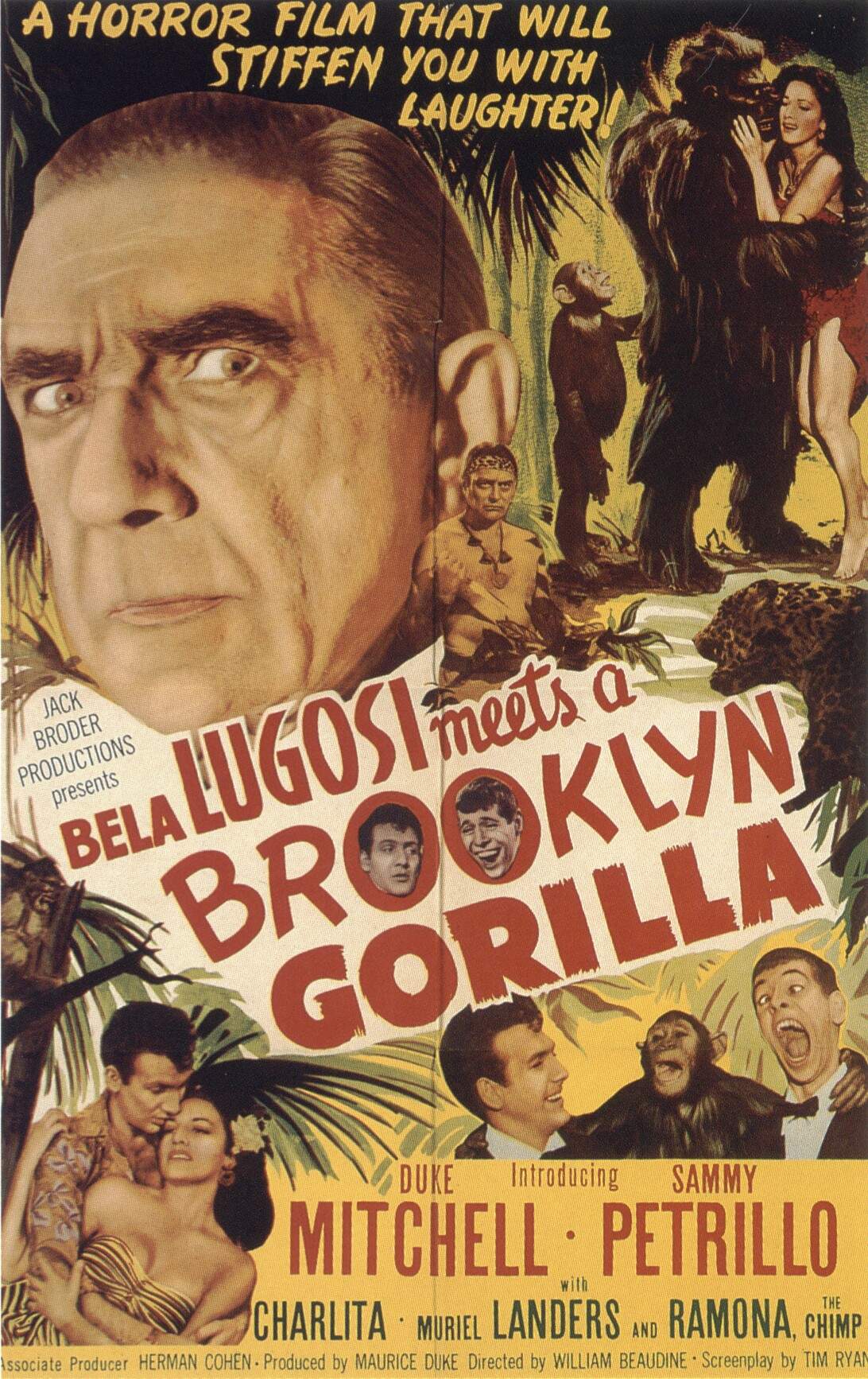 Hilariously funny grade-D movie about two entertainers, Duke Mitchell & Sammy Petrillo, who drop in unannounced in the tropical island of Cola Cola only to end up being used by the evil Dr. Zabor, Bela Lugosi, The mad scientist on the island in his experiments on the mysteries of the evolutionary process in determining the link between man and primate.

The Doc. also has a crush on his assistant Nona, Charlita, who’s the collage educated daughter of the island’s Chief Rakos, Al Kikume, but isn’t making any headway with her. In pops Duke Mitchell and Nona falls heads over heels in love with him leaving the Doctor holding the bag as well as a grudge against Duke. Dr. Zabor in an effort to split Duke’s and Nona’s relationship has his gorilla-like servant Cula, Mickey Simpson, knock out Duke and bring him to his lab where he injects him with a serum that turns the handsome and velvet voice Duke into a big and ferocious looking gorilla.

Telling the natives on the island that there’s a killer gorilla on the loose Dr. Zabor hopes to kill two monkeys with one coconut by having Duke done in and then taking his girl Nona all for himself. Dr. Zabor also has his eye on Duke’s friend Sammy for further studies in his experiments in evolution due to Sammy’s unique cranium. Sammy’s skull is very similar to the Doctors chimp Romona that’s in his lab. Dr. Zabor thinks that there’s a connection between Sammy and the chimp on the evolutionary ladder between man and ape.

Duke in his new body is later hounded by a girl gorilla on the island who took a strong liking or monkey shine to him, handsome devil, giving Duke’s friend Sammy a pain in the neck with all the monkey business that Duke puts him through. Sammy also got his hands full with the very ample Soloma, Muriel Landers, who’s got a crush on Sammy like a ton of pineapples mango’s and bananas.

The whole movie comes to a head when Sammy in trying to save his friend Duke from Dr. Zabor’s plan to do him in takes a hit but instead of checking out of the movie wakes up at the “Jungle Hut” nightclub in Passaic New Jersey with the same cast but playing different characters in the film; it was all a dream.

Not bad at all if you take it for the joke that it is; a Lewis/Martin Saturday Night Live shtick that’s over an hour long and it’s very good. Bela Lugosi is having the time of his life in the film playing himself, who else, as the mad scientist who’s always getting distracted by not being able to take his eyes off the beautiful Nona.

Duke Mitchell is very good in his imitation of both Dean Martin and Maagilla Gorilla and also gets to belt out a few songs. Charlita is both smart and pretty as Nona the jungle Princess who fell for Duke and still loved him even after he became a big hairy ape.

0 99
Saying No To Hollywood