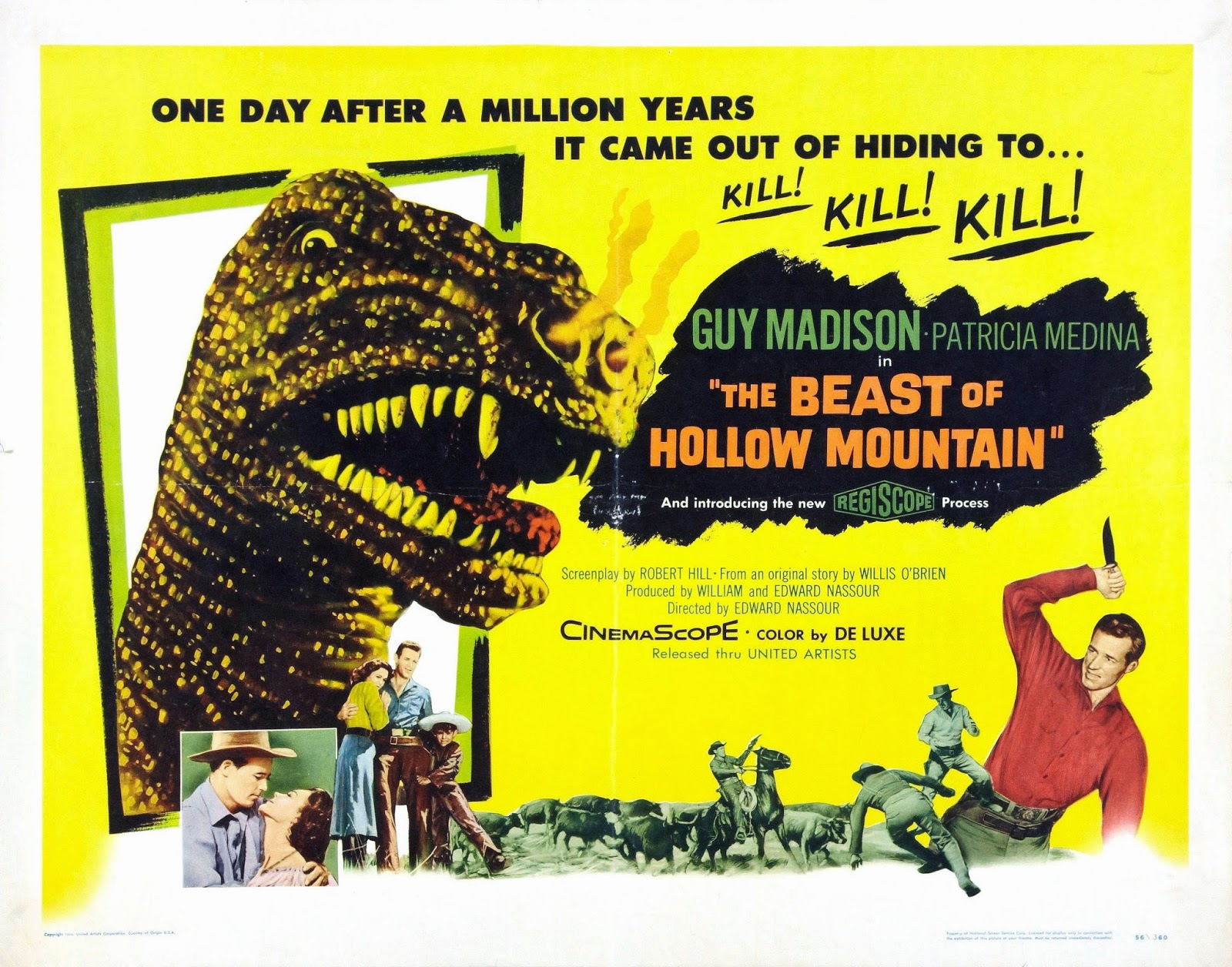 Just a little south of the Texas border, the cattle ranchers are having trouble with an unusual rustler — a Tyrannosaurus Rex. This is one of the few non-Harryhausen stop-motion films produced during the 1950s. The original concept was bought from Willis O’Brien by Edward and William Nassour, but they reneged on their promise to hire O’Brien to do the animation. The Nassours did it themselves. The animation is extremely rough, but the model of the tyrannosaurus is pretty good (except for its excessively long tongue — it looks like a long red tentacle!)

Be prepared for a long wait before the dinosaur shows up; the first two thirds of the film is pure Western soap opera and endless filler scenes of a Mexican fiesta. The dinosaur doesn’t actually make an appearance until the last twenty minutes of the film. The climax, however, is action packed — a running battle on the open range between a hungry dinosaur and the cowboy hero, Guy Madison (star of TV’s `Wild Bill Hickok’ from 1954 to 1957). Patricia Medina is the lovely heroine.

Watch for a scene in which the tyrannosaurus runs after a galloping horse; the animation was done with a series of plaster models, each one posed at a different point in the running reptiles stride. Special effects processing was handled by Jack Rabin and Louis DeWitt (`Kronos’ and `Atomic Submarine’).

TRIVIA NOTE FOR TRUE SCI-FI FANS: The T-Rex in this movie is just one of many sci-fi monsters that were defeated by actors who achieved fame in cowboy roles. In `Tarantula’ the spider is destroyed by a bomb dropped by pilot Clint Eastwood. The Martians in `War of the Worlds’ are pitted against Gene Barry, star of TV’s `Bat Materson’. The ants in `Them’ are gunned down by James Arness of `Gunsmoke’. `The Beast from 20,000 Fathoms’ dies from a radioactive bullet fired by Lee Van Cleef, star of `The Good, the Bad, and the Ugly’ (among others). `The Blob’ proves to me no match for Steve McQueen, star of `Wanted: Dead or Alive’.

Other famous cowboys featured in 1950s sci-fi movies include Eric Fleming (`Rawhide’) in `The Conquest of Space’ and `Queen of Outer Space’, Michael Landon (`Bonanza’) in `I was a Teenaged Werewolf’, and Ken Curtis (`Gunsmoke’) in `The Killer Shrews’. Sci-fi veteran Richard Carlson never achieved fame as a cowboy star, but he did get to play a cowboy in Ray Harryhausen’s faithful 1968 version of the ORIGINAL cowboy-versus-dinosaur idea — which was first thought up my Willis O’Brien back in the 1930s; `Valley of Gwangi’, twenty years before `Beast of Hollow Mountain’!

0 139
The Pretender To A Cinematic Throne